Ever since the creation of Hive March 21, 2020 the development of the platform is being funded by the Decentralized Hive Fund or DHF in short. This fund now has even more important role since there is no central entity to for development and all the funding is being done by this method.

Let’s take a look how the funding went trough this one year, including the funds received in the DHF.

Where Does The Funds For The Development Come From?

The core source of funds for the DHF comes from the allocation of the 10% from the HIVE inflation. But since the last year a huge chunk of funds was allocated to the fund when the HF that created Hive happened. All the Steemit Inc stake (ninja mine) was transferred to the fund. This stake is now slowly being converted to HBD for a period of five years (0.05% per day). Another source of funds are beneficiaries rewards that authors set for the fund, when creating a post, and lately the transfers from the trading that aims to peg the HBD to 1$, or the @hbdstabilizer.

As already mentioned 10% of the Hive inflation is being allocated to the DHF. This is the core source for funds for the DHF. Here is the chart. 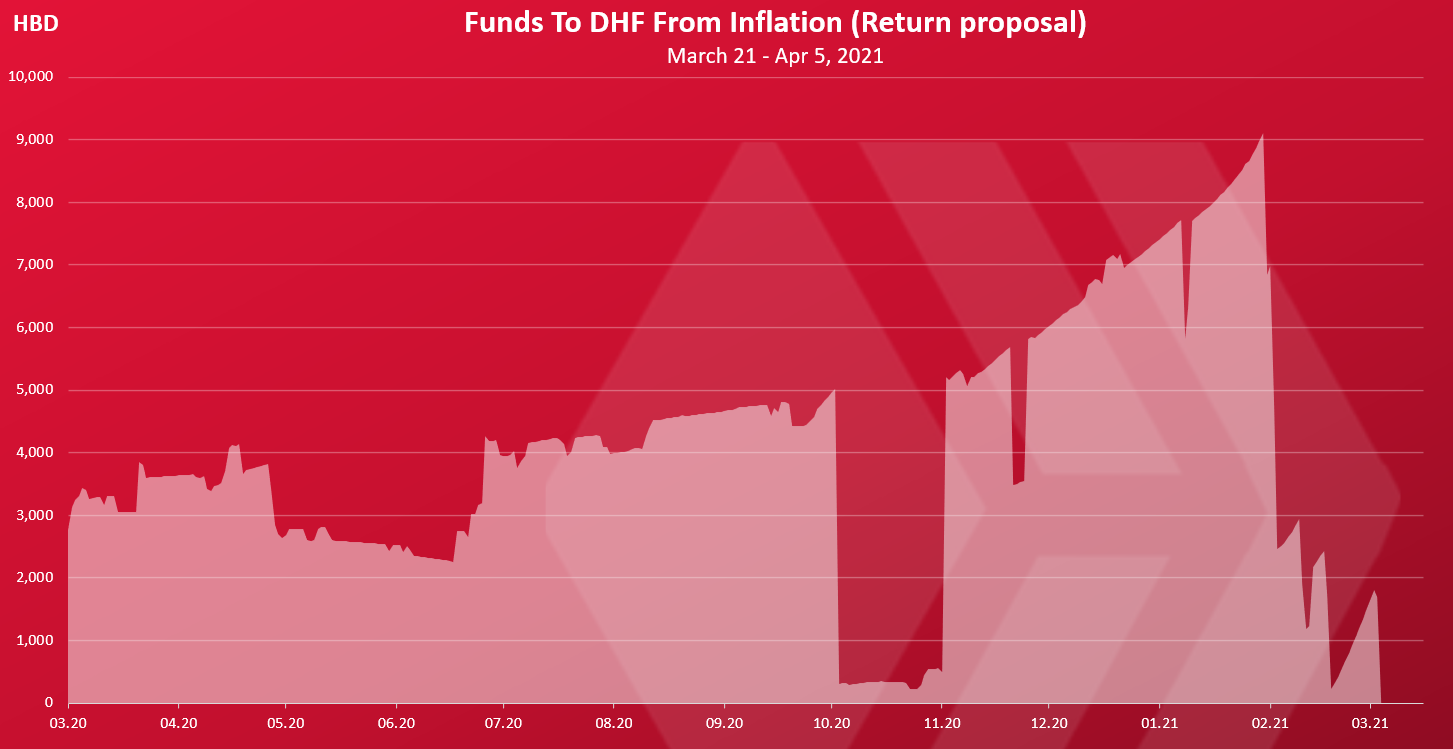 The gaps in the chart are the funds that are paid to the DHF proposals/workers.
We can notice the overall up trend, this is mainly because of the increase of the HIVE price. The higher the HIVE price, more HBD is sent to the DHF.

We can also notice that in the last period there is almost no added funds trough inflation. This is because of the @hbdstabilizer proposal that is taking HBD from the @hive.fund, selling it for HIVE and then returns it to the DHF again. In a way the funds still end up in the DHF, just trough other channel. We will see this bellow.

The @hbdzstabilizer is a proposal that is trying to keep the HBD price to 1$.

Almost 1.5M HBD was added to the @hive.fund from inflation.

HBD From Slow HIVE Conversions From The Ninja Mine

When the hardfork that created Hive happened, around 83M HIVE were transferred to the @hive.fund mostly from the Steemit Inc funds from the ninja mine. Because the DHF uses HBD for funding proposals, the HIVE needs to be converted to HDB. Starting from October 2020, a slow conversion have been put in place, converting 0.05% of the stake per day. This will roughly take five years to convert all the HIVE to HBD.
The long period is chosen to avoid price volatility, because the final amount of HBD will depend on the HIVE price.

Here is the chart for HBD created in this way. 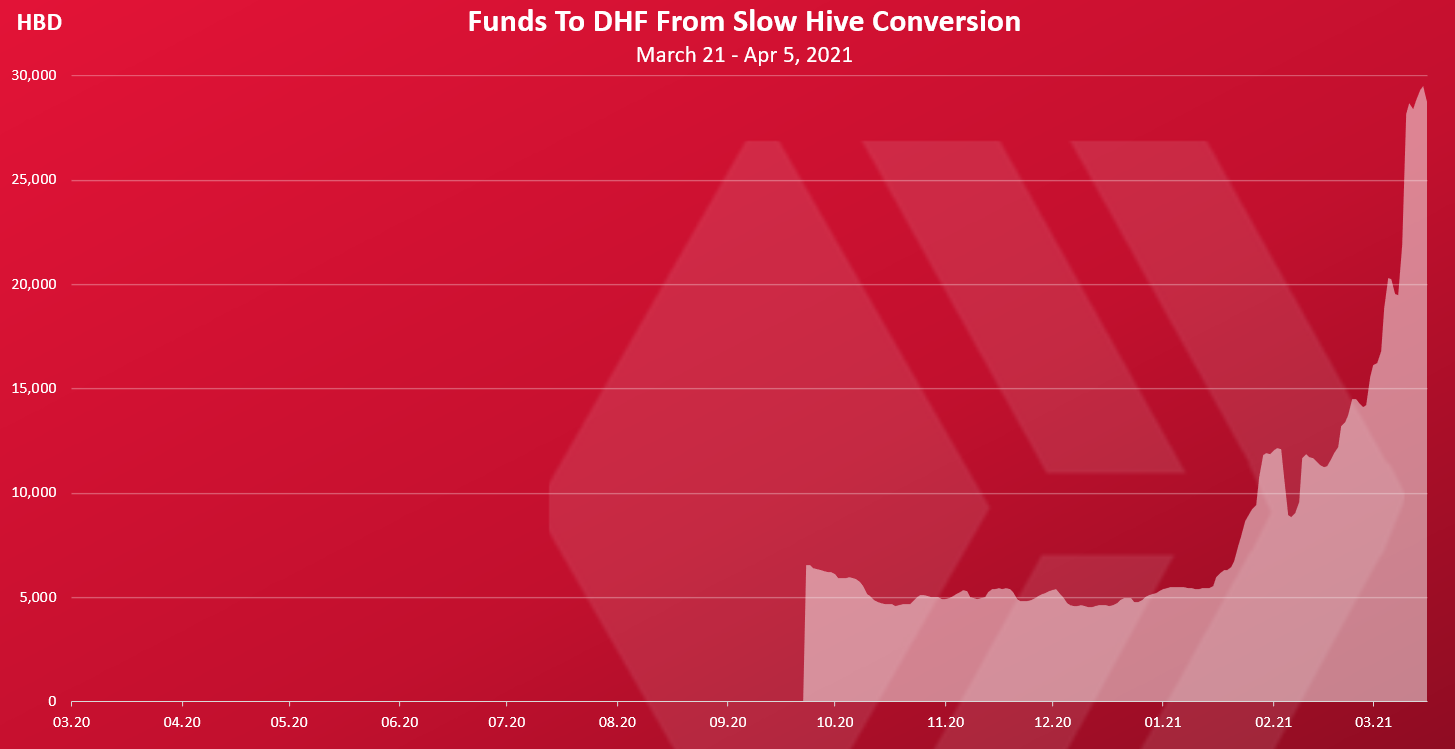 I have left the horizontal axis from March 2020, just to show when the conversions started.
As we can see at first around 5k HBD per day were added in this way, but in the last period the HBD from conversions has increase a lot reaching almost 30k HBD per day.

As mentioned the amount of HBD created in this way depends from the HIVE price. Approximately 40k HIVE is converted per day, and declining, as the overall amount of HIVE in the @hive.fund is decreasing. At the moment there is 76M HIVE in the fund, and it started with around 83M. Meaning in the last months around 7M HIVE was converted to HBD, generating around 1.4M HBD.

The DHF can be funded by simple transfers as well. Anyone can send HIVE or HBD to the account and the funds can be then used for funding proposals.

Usually these transfers are small, but in the last period a large amounts have been transferred to the @hive.fund from the @hbdstabilizer.
Here is the chart. 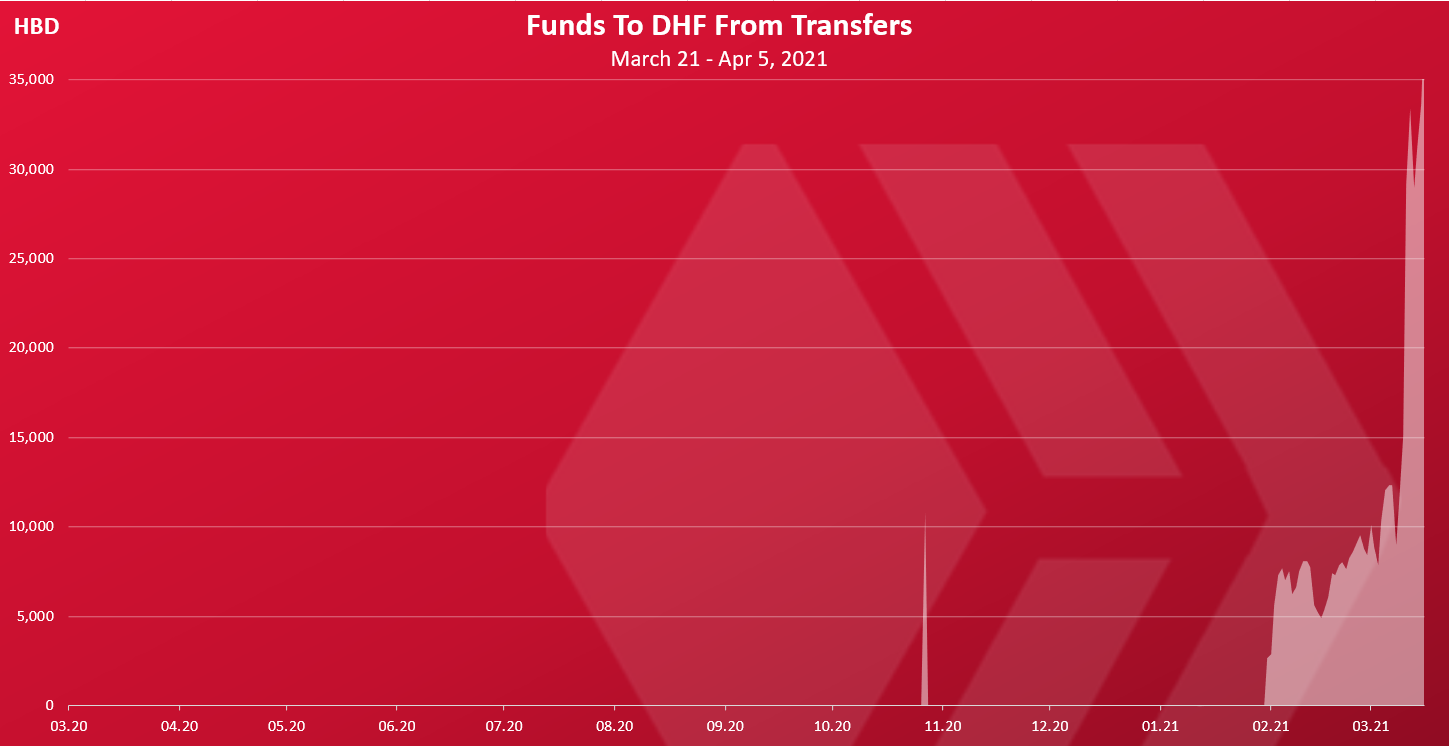 We can see that prior to February 2021, there are very small amounts sent to the @hive.fund. But as the HDB price increased significantly above 1$, and the @hbdstabilizer was launched the transfers increased a lot.
When HIVE is sent to the DHF, it is being instantly converted to HBD.

At first there was around 7k HBD from daily transfers, but in the last days the amount is higher than 30k HBD per day, reaching more than 500k HBD sent to the DHF in this way.

Users can set the @hive.fund as beneficiary when posting to send their posting rewards to the fund.
The chart for this looks like this. 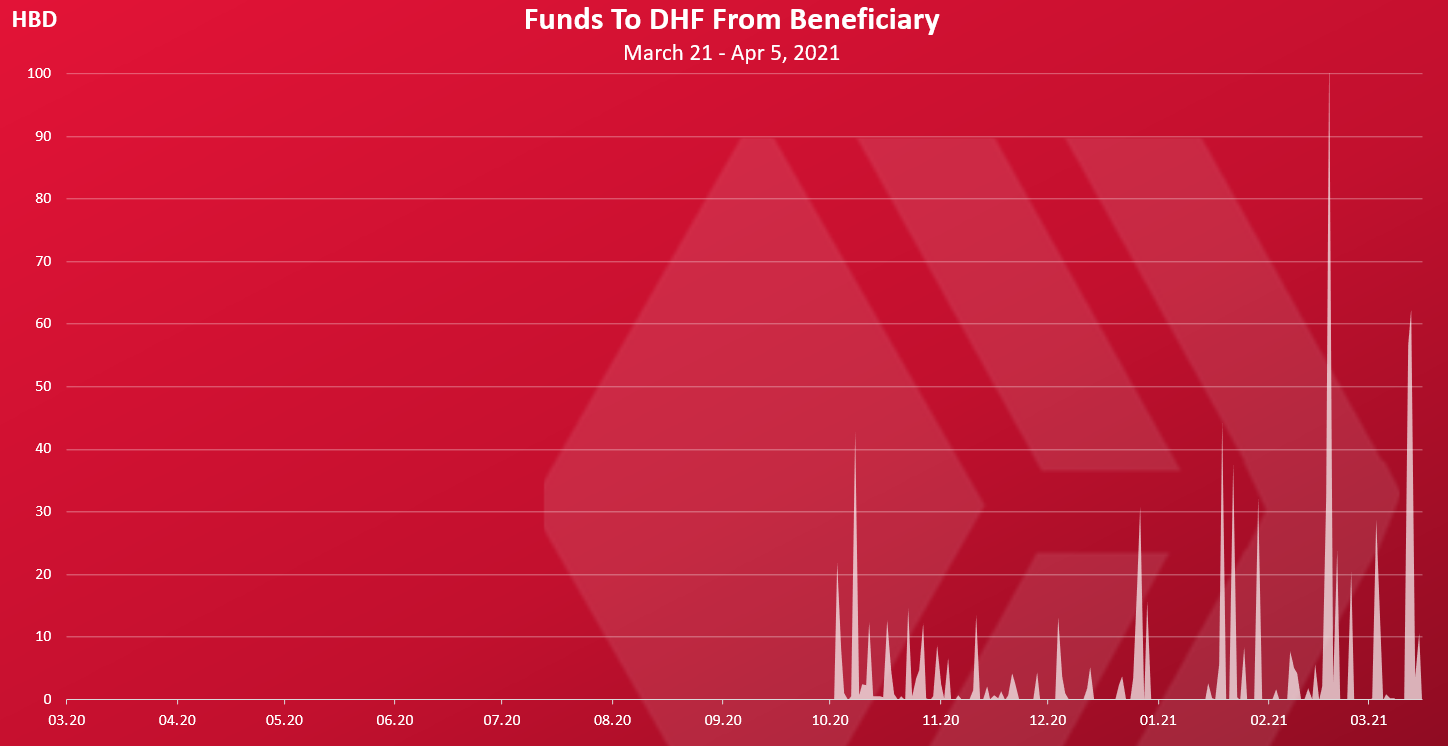 Not a lot of funds are created in this way. The @hbd.funder account is running a beneficiary post for the DHF, but the beneficiary is set to the @hbdstabilizer, meaning it is not show in the chart above, but in the transfers chart.

When we sum all the above, we get this. 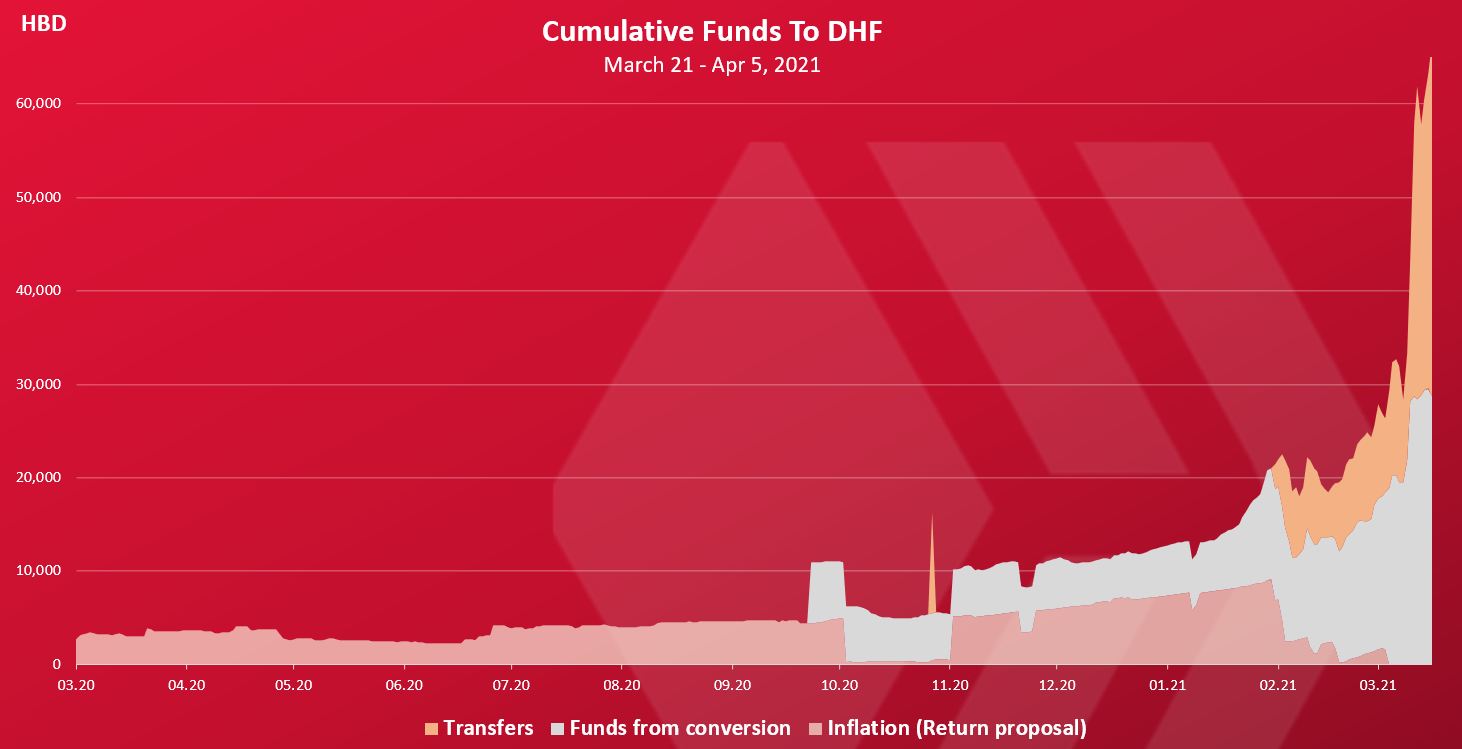 The @hive.fund account now has 2M HBD and 76M HIVE, resulting in more than 4M USD in dev funds.
Only 1% of the HBD can be paid per day for proposals, meaning a 20k HBD daily budget now. The HBD in the DHF will keep growing going forward and the overall daily budget as well.

The previous charts were for funding the DHF. How about payouts? How much HDB has been spent for development in the last year? 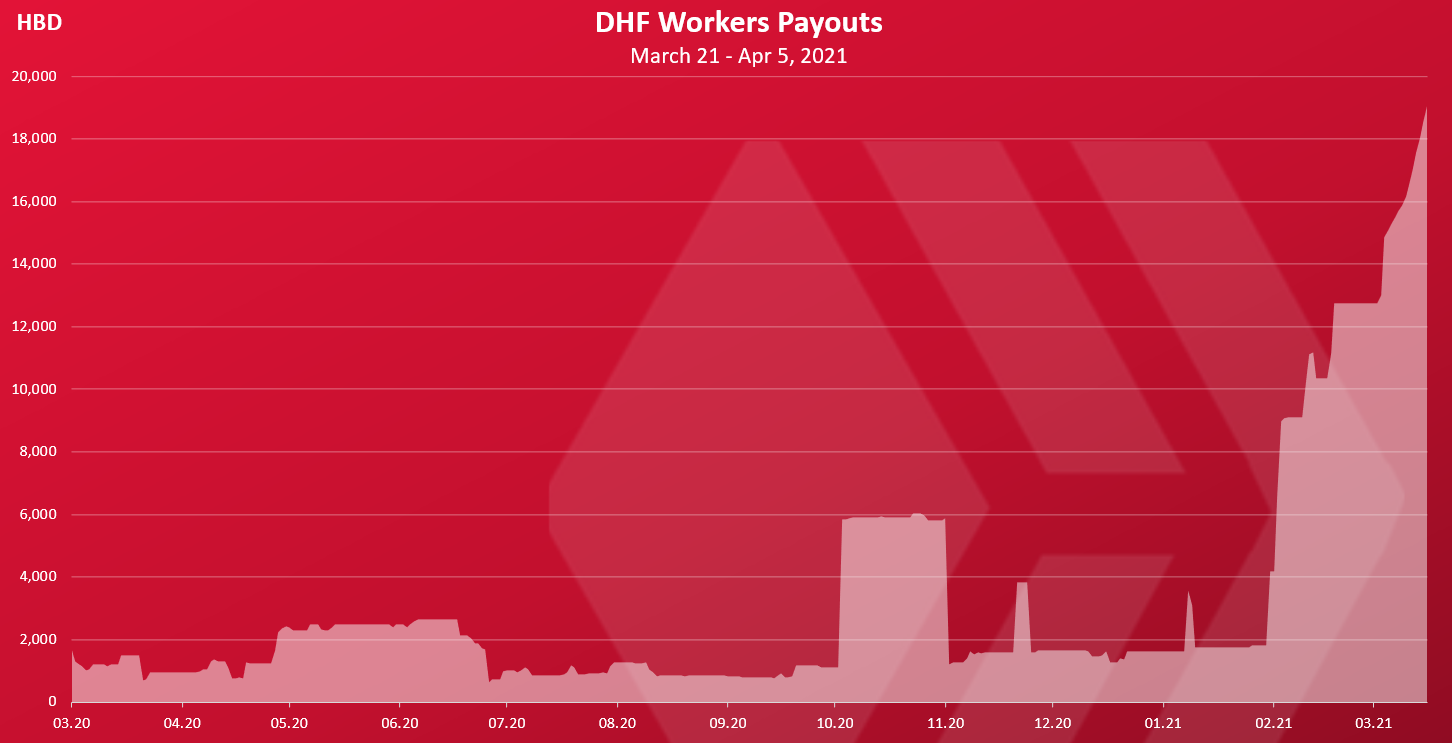 A significant increase in the payouts in the last period. But this again is due to the @hbdstabilizer, that in actually is not a payout, because the funds are sent back. If we remove the @hbdstabilizer we will see that in the last days the proposal payouts are under 1k, and close before that they were in the range between 2k to 5k HBD per day.

Rank Of The Individual Workers/Proposals Payouts

At the end, who has received the funds from the DHF.
Here is the chart. 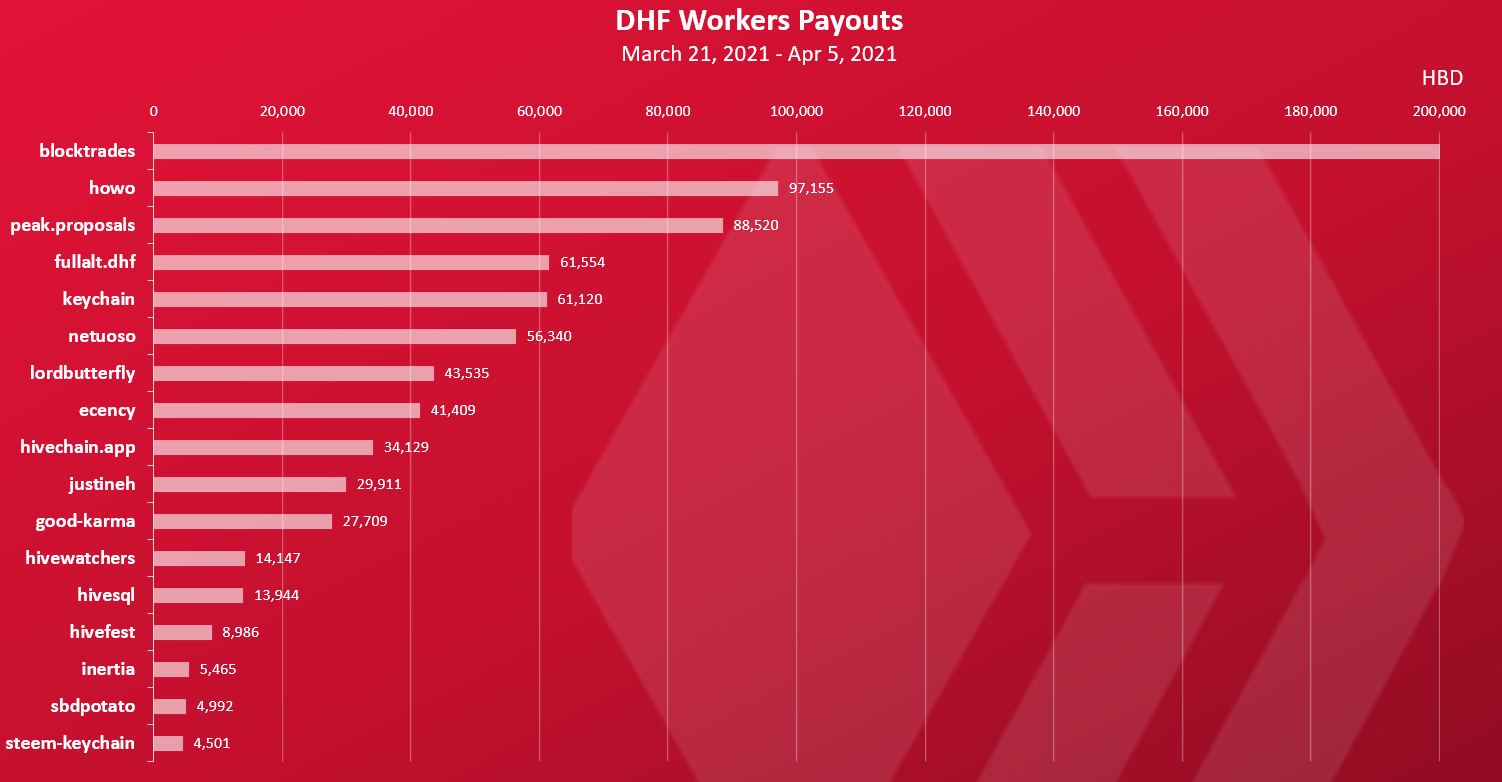 Note I have excluded the @hbdstabilizer account that has received almost 400k in HBD, because it is sending funds back.

@blocktrades comes on the top for the year, but he has managed some funds for the airdrop for some accounts that have been mistaken in the hardfork and didn’t received funds. Meaning not whole sum is accounted. The other funds were for image server.
@howo is on the second place, with almost 100k HBD received in the year. He is working on a core blockchain development.
On the third place is @peak.proposals, for the peakd.com development with 88k HBD, then @fullalt.dhf with 61k HBD. The @keychain proposal in the top as well, and the @lordbutterfly for the marketing proposal.

Overall, the top paid proposals are around 100k HBD per year, and there are 8 proposals that have received between 50k to 100k HBD. In total 32 proposals received some funding from the DHF in the first year of HIVE. A total of 820k HBD was paid for proposals development in the first year.

Will be interesting to see more than 100 proposals receiving funding from the DHF in the second year of HIVE, meaning boosting the development of the platform.