I might use bleo to rebalance into stable coins, without selling any LEO (well not really)

I've been pondering and quizzling what I should sell in order to diversify into stablecoins.

I like the idea of having a stash of stablecoins as a hedge against a downturn, you can get a decent yield from them in various DEFI projects, and there's sufficient diversity of them around now that I'm happy to have a smaller amount in a few of them rather than risking a larger chunk in USDT which probably isn't backed by anything tangible.

The main barrier to moving towards said stable diversification is that I don't want to sell any of my crypto holdings for said stable coins - well, except for my 2017 bags, most of which continue to sit on the exchanges refusing to be bought at a price I'm happy to sell them for, and they aren't anywhere near enough to meet the kind of stablecoin targets I want by the end of 2021.

bleo I think could help me here....

At some point very soon we are going to have a bleo compatible with the Binance Smart Chain. I don't know what the pair is going to be, but I bought some BNB this morning (it seemed reasonably cheep) in anticipation of bnb-bleo being the most likely pairing. (If it's not I'll just swap the bnb for whatever it's paired with). 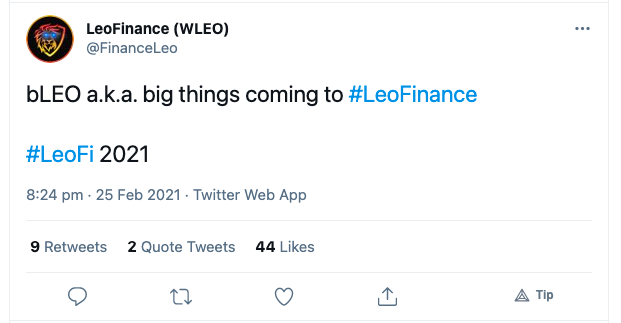 So the strategy is simple - do a quick, hard Powerdown of some leo once the Blank snapshot is done, probably let that run for a week so I've got a couple thousand LEO to play with, swap some if necessary to the pair-coin and then pool bleo with whatever the pair is.

Then skim off what I assume will be cake, or whatever other crazy DEFI coin and that can be my route to diversifying into stables.

Besides the risk of BSC being hacked and the fact that I just don't really trust Binance that much I could lose some leo to bnb in the pool, but given that my other option for diversifying is to sell LEO, the loss (hacks and centralised freezes aside) will probably be less than just selling off now, well assuming we don't have a flash crash.

Keeping in mind the later possibility I MIGHT sell a tiny amount of LEO into stables, like 20% or something, early on just as a hedge, but I'll only do that if the fees work out OK for the amount I'm converting.

I'm quite happy with this gradual-gradual strategy, and it won't really feel like I'm cashing out LEO for stables either, which will be nice, AND I get to play more crazy-defi-games!

Or might we get a Rune pairing on BEP?

Now that would be cheeky! And nice as I've got plenty Rune to cover the amount of Leo I'd be willing to pool there.

Oh man, I seem to have drifted back into the crypto-wonderland again!