$VIA one of the only alts showing green 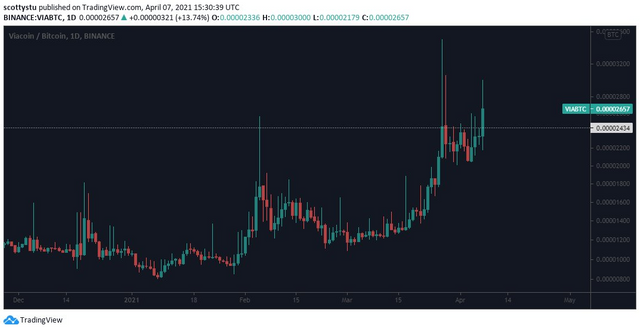 $VIA has been doing well over the last week and with the entire market completely in the red it's only of the only one's showing green right now. Over the last few days VIA has made a low of 1.18 and a high of 1.56, it's currently moving for around 1.50 on most exchanges. Over the last 24 hours it's made a low of 1.24 so doing quite well in the short term. This is one of those older coins I have been referring to lately, it's having it's day in the sun but we'll see how long it lasts for. Something tells me these older coins aren't going to be pumping as heavily as the one's we've been seeing come out over the last 6 months. I could be wrong but it's just a hunch I've been feeling lately, I don't know. Days like today are tough when everything has retraced dang near 30%, was talking to a friend about one coin unparticular that retraced almost 50%, not so much fun ugh.