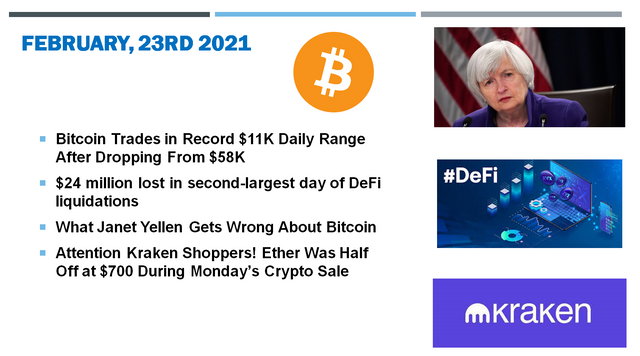 Bitcoin traded within a record-setting $10,877 range Monday after plummeting from its all-time highs above $58,000 set over the weekend. This marks the leading cryptocurrency’s first five-figure daily price range. The Feb. 22 crypto crash has sparked the second-largest volume of DeFi liquidations in the sector’s history, with more than $24.1 million worth of loans being forcefully closed within 24 hours.

According to crypto data aggregator DeBank, $13.7 million, or nearly 60% of the losses occurred on Compound, followed by Aave with $5.4 million worth of liquidations.

Yesterday’s liquidations were the second-largest to hit DeFi, trailing behind the $93 million in margin calls that were triggered by a sudden increase in the price of DAI on Nov. 26. 2020. The incident saw DAI spike by 30% on Coinbase Pro — the source of Compound's price oracle — liquidating more than $88 million worth of crypto loan collateral on the protocol.

The flash-crash has had a devastating impact on margin traders as well as DeFi users, with Kraken users have also demanding compensation for mass liquidations caused by an accelerated crash that saw ETH drop to $700 on Kraken while the asset was changing hands for roughly $1,400 on other exchanges.

🗞 What Janet Yellen Gets Wrong About Bitcoin

Janet Yellen has again blasted Bitcoin, but critics say several of her assumptions about the cryptocurrency are inaccurate.

At the New York Times’ DealBook DC Policy Project today, the US Treasury secretary reiterated to journalist Andrew Ross Sorkin that she’s no big fan of Bitcoin, this time taking aim at its energy consumption and potential use for illicit financing.

“I don’t think that Bitcoin is widely used as a transaction mechanism,” Secretary Yellen said in response to a question about whether the Treasury Department needed to be paying more attention to the asset. “To the extent it’s used, I fear it’s often for illicit finance.”

🗞 Attention Kraken Shoppers! Ether Was Half Off at $700 During Monday’s Crypto Sale

No, it wasn’t a misprint.

Ether, the second biggest cryptocurrency by market capitalization, at one point traded on the Kraken exchange at less than half the prices found on other exchanges during Monday’s massive sell-off.

Amid the market melee that pummeled crypto assets across the board, ether’s prices went as low as $1,546.53, down from around $1,800, according to CoinDesk 20. However, that number was a staggeringly low $700 on Kraken. The breathtaking drop wasn’t relegated to ether. Trading of cardano suffered a similar fate on Kraken, with the ADA/USD pair slumping to $0.156 at 14:23 UTC from $0.842 three minutes prior. During the same hour, the lowest price of cardano recorded on CoinDesk 20 was at $0.835. "Crypto.com is pleased to announce the listing of Filecoin (FIL) on The Syndicate platform."

"Development is underway. The estimated launch date is February 23, 2021."

"The Graph Foundation is hosting its first Protocol Townhall next Tues, Feb 23 @ 8am PST."

Joe Bender, Developer Evangelist, Hiro PBC will be giving a talk on "Building the User-Controlled Internet with Hiro on Stacks" on Feb 23rd.

➡️ Be paid daily to browse with Brave Internet Browser
➡️ A secure and easy wallet to use: Atomic Wallet
➡️ Invest and Trade on Binance and get a % of fees back

➡️ Get 25$ free by ordering a free Visa Card on Crypto.com using this link or using this code qs4ha45pvh

20% of this article rewards wil go to the @hodl-fund account in order to support HODL Community Initiatives.
Find out more about HODL Community: Crypto Social Community and by following our community account @hodlcommunity

Helps us by delegating to @hodlcommunity