El Salvador making Bitcoin legal tender all over the country has made this day the Bitcoin day, and what could Bitcoin do better during such an event than simply "flash crashing"... Yep, the most volatile of them all has once again proven its shaky nature when it comes to dollar valuation.

Fundamentals rock, no matter what...

I don't know exactly what caused the crash, but I got a feeling IMF is behind it :). On a serious not though, I would blame it all on leverage trading as $2.6 billion has been recorded in liquidations during the current dip of Bitcoin. What this aggressive price action has managed to do was to pull back Bitcoin to last week's value.

Meah, we had worse days than this one... 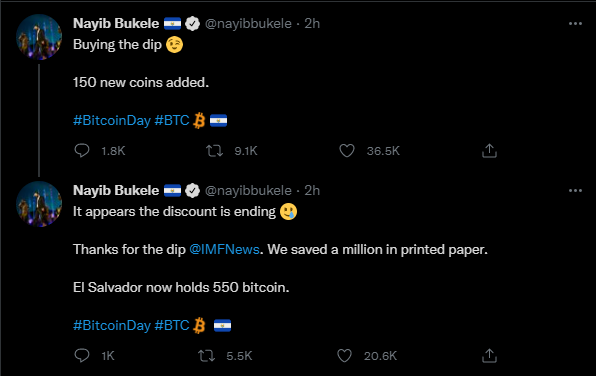 Smart money is buying the dip though and one of them is the president of El Salvador, Nayib Bukele who just added 150 more Bitcoin to the country's treasury, now holding 550 coins. Yes, Bitcoin is already a part of a "national treasure".

I don't know if that's the proper name for it, but aside from this dip that got many in the crypto space shitting their pants, the digital gold is gradually becoming a store of value recognized by governments and not only traders and investors all around the world. Once the smoke settles, on this Bitcoin day today, that's the clear takeaway we should focus upon.

You know what else?

Bitcoin doesn't give a shit about charts and predictions. I've read so many bullish case scenarios based on TA lately, many of them proving to be crap today, making me think that charts are actually following Bitcoin and not vice versa. Fundamentals scream and there's no turning back for this train.

You either onboard or watch it leave the station, same as I did in mid September 2017. We're close to mid September and history seems to be repeating itself once again. Four years ago "the crash" was caused by China ban and now it's positive events doing that. Either way, the only way is up. If the both events can be called milestones in what's left of both bull cycles and if history repeats itself, then...

$280,000 is what S2F model was predicting as a peak for the cycle and it might be o track with this one. I don't know why, but Plan B has blocked me on twitter, but I sure remember this target. Anyway, it seems that Bitcoin has celebrated its day in its own particular manner and that the president of El Salvador is not just a hodler, but a dip buyer as well.

Golden times ahead indeed, you just need to wear the right goggles. What about you though, have you bought the dip? I bet the 3 million members reddit group from Brazil planning on buying $30 worth of BTC each will but the dip. I love this type of community efforts, I love Hive and I love crypto. I want to do this for my whole life.