What are you staking on Hive today? 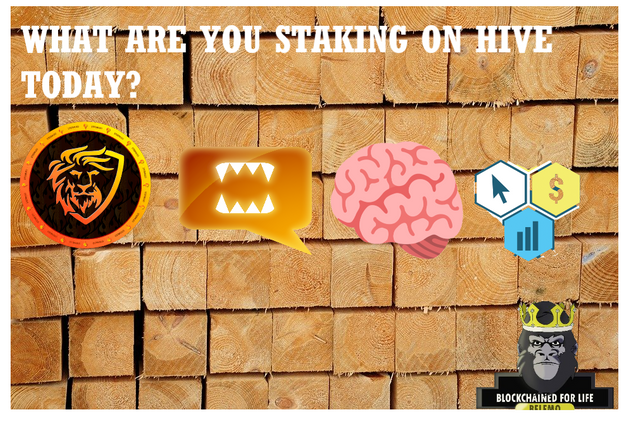 On numerous occasions, I've talked about my quest for developing multiple streams of passive income. To achieve that, I often look out for solid projects that I can stake assets.

Technically speaking, staking is my mainstay. Although holding and picking my moments to buy or sell also plays a part, the real driving force for my finance is staking.

It's a slow burner approach to growing your portfolio that I frequently talk about and encourage people to do. Staking assets might not seem as risky on the surface but that usually depends on the asset that you decide to stake.

There are many second layer assets on Hive-engine with serious value and potential. I strongly believe that within them are gems that will grow into billion dollar projects in the long run.

One obvious choice of asset to stake is SPS token from Splinterlands. Despite being relatively new on the block, the token has turned heads and will be making an even bigger splash in the near future.

Right now, I'm sitting on a small pile of 2141 SPS tokens staked and I'll keep increasing that number till I get to my 15k target by the end of the year. Other than the staking rewards, the asset will also grant me certain the opportunity ti participate in Splinterlands governance in the near future.

Closely related to SPS, we have the SPT token. In recent times, I've actually been dumping the token hard because of my anxiety.

The astronomical rise in value of the asset was unprecedented, so I was kind of spooked to selling.

All that has changed now, and I'll be staking every SPT token I earn from posting on Splintertalk. My realistic target for the end of the year is 50k tokens staked but that all depends on how the community receives my content and how much I interact there.

You should be staking POB

POB token is one interesting token that I've staked without actually knowing why. It is always scarce in the market but somehow, it's also always dumping.

The token has been embroiled in a series of scandals concerning distribution and stuff but that notwithstanding, it still has the backing of the community.

I believe the community is the most valuable asset we have on Hive community. All it takes is one big push and I think POB will come good.

Anyway, now that the token value is still quite low, I've been staking as much as I can. I've sold as well, but that's all part of the game.

This obviously goes without saying, there's no week that passes where I don't stake some Leo tokens. I've not put any benchmark on my weekly staking but I generally have more leo than I did the week before.

Just like POB, Leo is currently dirt cheap, so this is the best time to accumulate and stake. Unlike POB though, there's Leo in the market.

If you're having troubles buying from the Hive-based dexes, then you could just get it either Wleo or Bleo from Ethereum or Binance chain respectively. There's less stress in buying from there and after that, you can just unwrap it, and send it to your Leo accounton Hive.

I stake CTP because...Why not?

In virtually all my posts, I add "ctp" as one of my tags because it's an opportunity to earn tokens. There's quite the market for the tokens and since I earn a little bit from posting there, I just accumulate it.

Most Leofinance worthy posts also fall into the CTP and you can also reach out to @jongolson if you'd like to learn more about the platform. Right now, I have a small pile of 2158 CTP tokens staked that I earned from post rewards.

Right now, my current stake puts me side by side with @theycallmedan, so it's safe to say I'm doing something right with my life.

Yeah there are other assets that are worth looking at. It's your decision if you'd like to stake them or not though. FOr most of the remaining assets, I stake them because they're tags that people use and so, it gives me an extra source of income from upvoting content.

To trim or not to trim

This is a complete list of everything I stake on Hive network right now. I've contemplated cutting down on the number because it is tedious to manage. However, since most of them are only worth a couple of dollars, I just employed a casual approach.

I just curate, dump or restake anything that comes out in most cases other than Leo, SPS, SPT, POB, Sports and CTP. I take those assets a bit more serious than the rest and manage them properly because I suspect one of them might turn into something bigger than they currently are.

It's my perspective of course, and it is based on the fact that these assets are from platforms that are actively building or have community backing. Time will tell if my gamble will pay off.