We've previously announced our first Airdrop with a promise for a few more ways to earn some of DLUX tokens. This time around we'll explain a bit about what DLUX tokens are and how they work with another way to earn some.

DLUX tokens are a full consensus method for securing tokens on HIVE. In the least technical way possible I'll try to explain how our system works:
Imagine you and your friends decided to play a board game like Monopoly and after you set up the game you realize that somebody took all the bank notes out of the game. So instead of packing up the game you all decided to keep a ledger of balances. All 8 of the players have a note pad and write: Players 1-8 have $1500. As you roll the dice and play the game all of you keep your own record of balances. Player 1 buys Reading Railroad so all the players subtract $200 from Player 1's balance. Player 2 get's community chest and all the players add $100 to player 2's balance and so on. The game works flawlessly in effect because nothing has changed.

This is exactly how DLUX tokens work in practice, except instead of following the rules of monopoly they are following a different set of rules, written in code, and ran automatically from reading the 3 second blocks on hive. Instead of talking over the table at the end of every turn and saying the balance for player 1 is $1300, they write a transaction to Hive that includes all the totals. Everybody can read these transactions and they count to make sure that most of them have the same results, if somebody gets a calculation wrong they'll know what the majority has as the balance and copy their totals and start again.

The only real magic here is if somebody wants to trade some items. DLUX takes advantage of Hive's Escrow Transaction feature, so if you want to trade some Hive for DLUX you can choose a few players to handle an escrow transaction and ensure nobody can steal Hive when no one person is the "Bank." This is called a decentralized exchange and to date very few exchanges operate in a manner that can collectivize the operation of a Bank. This is generically called "DeFi" or Decentralized Finance.

Our DeFi protocol is cool, but it can be even cooler. We talk about how we are achieving these more advanced features in proposal 171.

I've spoken to some of the features of the Decentralize Hive Fund and one of my major criticisms is the lack of participation. While over 100,000,000 Hive Power currently votes for our top witnesses, only ~30,000,000 HP votes for the top proposal. This brings the perfect opportunity to get involved in some Hive governance and get a few DLUX as well!

On June 1st, Every Hive account that votes for an active (on June 1st) proposal with greater than 1 HP(Not Proxied) will receive 0.001 DLUX per 1 HP up to 10 DLUX. Which means, every account under 10,000 HP will see the best airdrop per HP... while accounts larger than this will receive the maximum drop, but at a lower rate over all.

Check out all the proposals and make your best votes. As always, feedback is welcomed in the comments.

For full disclosure I'm voting for:

If you're on a discord server with banjo. You can check by account like this:
$approval disregardfiat 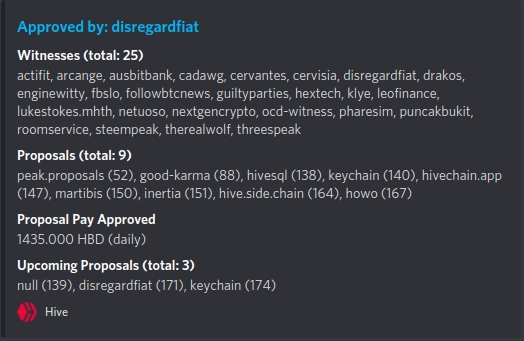 If you're not, feel free to join the dlux discord