We are happy to announce a partnership with ARK Marketplace. The growing frontpage for the decentralized web!

DLUX stands for Decentralized Limitless User Experiences. It’s an open-source project built on the Hive blockchain that started as a way for users to build, post and monetize virtual reality experiences without needing to know any code themselves. By leveraging networked A-Frame, visitor avatars spawn into social VR rooms with interconnecting portals to other places, all in-browser across mobile, headsets and desktop computers. With full Hive wallet integration, the ability to purchase and tip became a reality for VR art galleries, augmented reality menu systems and 2D web dApps.

As the project grew, the need for an oracle arose to control how user assets can be packaged, pinned and distributed. Now much more than a decentralized metaverse, DLUX is a full DeFi (decentralized finance) solution. The DLUX token architecture includes the ability to time lock tokens for vote power or governance collateral, and a DEX (decentralized exchange) enables atomic swaps of assets between users. No central authority exists, instead the novel use of a DAO (decentralized autonomous organization) with governance collateral held in escrow by smart contracts ensures orders placed on the DEX are safe. The users maintain consensus in a deterministic way by reading the Hive chain block-by-block and broadcasting their response in the form of a hash.

About a week ago I got a couple of text messages from my friend about getting together and buying Gamestop, $GME, because it was possible to short squeeze Melvin Capital. While I cheered them on I didn't realize that the events unfolding before us would be quite so dramatic.

Robinhood, the brokerage of choice for many in WallStreetBets hid $GME and actually closed their customers positions to the benefit of big finance. 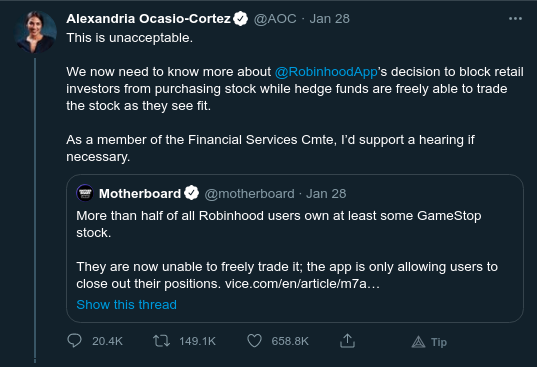 I don't care to rehash what can be found in just about every news source. But I think if you've been paying attention long enough you'll agree with Justin Amash:

So how do we defeat it through decentralization?

Less than a year ago Hive wasn't and there was a series of events that lead to the community here separating themselves from a centralizer. Today the price is almost exactly the same as it was when we separated, as the markets surrounding us have 10x'd in many cases. But all is not lost, there are people here who have made Hive their home. The tokenomics and fees make Hive a great place to build with enough decentralization to ensure robustness. LEO Finance has had an incredible year, going from 0.15 Hive to 4 Hive. They've built bridges to Ethereum and are providing the most new accounts for Hive.

Over the past year billions have flowed into DeFi protocols, Ethereum, and it's ERC-20 Tokens. Hive is well suited for Decentralized Finance, it's feeless architecture but we lack the infrastructure to take advantage of this revolution.

To note here, our daily volume is on the same scale as the fees paid on the ethereum network.
With the right tech, and meme's/marketing Hive can rejoin the top of the cryptosphere... $DOGE 10x'd yesterday alone.

So what is the right tech?

How Does DLUX Token Architecture Work?

Out of necessity and a desire to build the fairest platform I structured DLUX as a DAO. This means that anybody with a hive account and a computer can run DLUX's Open Token software and verify transactions. If you make content for DLUX or buy tokens on the DEX you can lock those tokens for use in the DAO. What that currently enables is you to help determine consensus with your account, and fascilitate atomic swaps on our DEX.

Beyond just decentralized software, this is cooperative architecture.
Below it the transaction feed when @antisocialist wanted to buy DLUX:

There was no central party with custody of the funds, the entire network looked after the transaction chain. If something went wrong, collateral would be subtracted from the offending member to cover the total losses, and an equal amount would be burned. When everything goes to plan, each of the operators gets a small fee, and the network as a whole shares an equal part of the fee.

This paradigm is drastically different from the other types of exchanges around Hive. While Hive-Engine is starting a profit share with witness nodes who ensure balances on Hive Engine don't change. There is only one account that has custody of swap funds. A single point of failure.

Our next steps are to build multi-signature control to make it possible to perform partial fills of trades, lower some collateral requirements, and therefore fees. While enabling other collective actions like a work fund, cross chain bridges,

Some Recent Media to get your DLUX fix.

The Simulation Nation Podcast on Spotify

Redo of IPFS Containers for security