As part of a push to promote the Akash "Unstoppable Cloud" the team have come up with an awesome promotion. They are setting up a Minecraft server, hosted on the Akash network, and will be running a live scavenger hunt with hidden AKT treasure around the server. 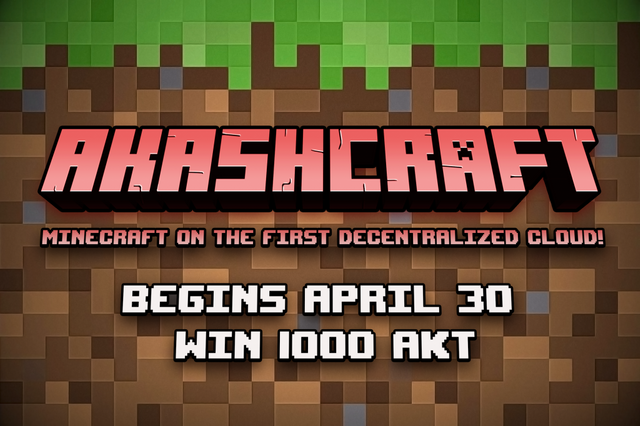 Akash is a fantastic option for hosting Minecraft servers, and that is what they are trying to promote with this contest. Marketing the Akash cloud to gamers is smart, with Minecraft returning to massive popularity amongst the Gaming community, particularly YouTubers and Twitch streamers. Setting up your own Minecraft server can become expensive, requiring dedicated hardware or a monthly hosting package costing significantly. This Akashcraft challenge is looking to showcase the unstoppable cloud to the gaming community.

How will it work?

The Announcement Post has all the details of how the contest will work, and what to do to get involved. Basically, the Akashcraft server will be set up, and the details shared during a live-stream event on the 30th April at 6pm PST. Requirements to join will be Minecraft Java edition, so if you want to get involved, you will need to have that version prepared.

The map on Akashcraft server will contain chests, that may hold the keys to AKT wallets. Finding those chests will give you the keys, so long as you can survive and not be killed while you hold it. Chests may also contain other items like weapons to help you along the way. Here are some quotes from the announcement linked above that will explain it better than I can.

The Akashcraft server contains three cities - a large city to the east of Spawn, and two smaller towns North and South of Spawn along a road leading from the large city.

Chests containing private keys to AKT wallets will be hidden inside and around the structures within the cities. Castles, nearby farm buildings, lookout towers along roads - all hold AKT rewards, as well as anywhere on the surface within city walls (meaning you probably won't find any AKT in a far-away desert). Chests may also contain weapons, items, or potions that will help you out in the server--just because you found a chest does not guarantee there will be AKT inside!

Any chest that contains AKT will be located next to a player-specific Ender Chest. The contents of Ender Chests can only be viewed by you, so any loot or AKT you find can be placed in an Ender Chest (a darker color than usual chests) to be reclaimed upon death.

If you are standing in the Spawn location that contains the Akash Network logo, you will not be able to attack or be attacked by other players; however, the rest of the world will have player-versus-player (PvP) enabled for high stakes!

*You may succumb to death from mobs and other players, and will drop your whole inventory on death, so make sure you take precautions to prepare yourself for combat.

Apologies for putting in lots of quotes, but I really think that explains how it will work better than I can.

Well, those following me on LeoFinance or Twitter would know I am a huge fan of Akash. My Akash content here on LeoFinance consistently brings significant external traffic from Twitter to Leo. 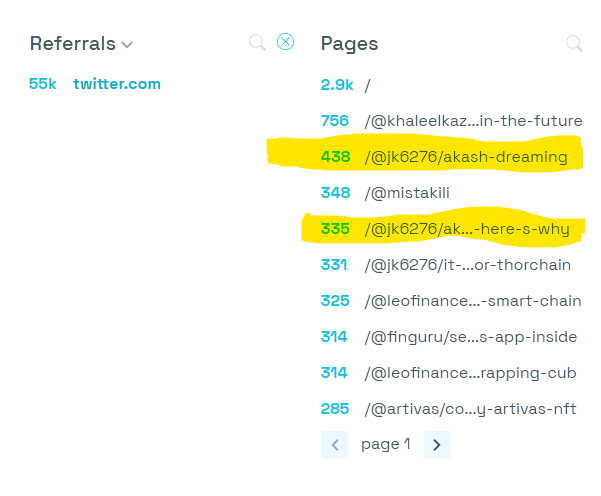 This screenshot is the top pages on LeoFinance that were landed on from links on twitter over the last 12 months. You can see that 2 of the top 5 pages are Akash content I have made. This little flex isn't really relevant to anything else in this post, just me taking a moment of pride in bringing external traffic to Leo.

Enough with the flex, what's your plan?

Ok, sadly, I have never in my life played Minecraft. Ever. So I really think trying to learn how to play, and be good enough to compete in this challenge is beyond me in the next few days. I have to work, and wouldn't have the time.

However, my kids love Minecraft, and play regularly (most days) and follow all these YouTubers. They know what's up when it comes to Minecraft. I'm getting them both the Java version of Minecraft, so they can play. I've already told them about it, and they are already pumped to go track down crypto. They are already planning their tactics, and how they are going to work together to give themselves the best chance of finding the crypto treasure.

Before the contest, I'll set each of them up with an Akash wallet. Any AKT they win will be equal shared between the two wallet. I'll use this as a way to teach them about investing, compounding and saving for the long term. When they turn 18, whatever is in those wallets will be theirs to do with as they wish. Currently, my son Mr J. is 9, and has already had a taste of crypto, playing Splinterlands for a while, and eventually cashing out his card collection (which I bought off him) for a laptop computer. My daughter, Miss S. is 12, and a dedicated Minecraft player with plenty of experience and skills. She is excited to play and see what comes of it. I have made sure they don't have any expectations, and told them there is absolutely no pressure, just have fun and see what happens. She is just hoping that her favorite Minecraft players Mr Beast and Dream join and she gets to meet them, or on one of their streams.

Where is @splinterlands currently hosted? Do they run the Splinterlands website on centralized in hour servers, or on cloud services like AWS or Google cloud? Akash can do everything those providers do, at a much lower cost. @yabapmatt, @aggroed and team, you should check out this Akashcraft event, and think about hitting up the Akash team to see if Splinterlands could run cheaper. Another benefit is that you could pay for your cloud service (if that's what you use??) directly with crypto you make from the game, instead of having to cash out to dirty fiat. Something to think about anyway. The Akash team are obviously keen for partnerships, and having the premier decentralized Trading card came running on a Decentralized cloud service sounds like a great marketing synergy for both parties.

The Livestream event starts at 6PM PST on April 30, and will be available here:

Hit me up in the comments, or on twitter if you want to know more about Akash.