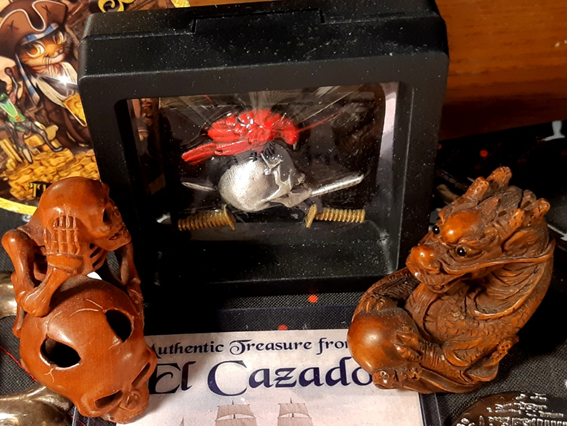 “Jin Jin, I can sense the Chi of the many souls in this silver.” 🐲
💀 “Yeah Burt, I love this job. Did you check out her DVD collection? Cool!”

The showering of gifts from Nyssacat373 continues from last week’s #piratesunday post.

Many Stackers, treasure hunters, aficionados of Shipwreck silver, and Pirate at heart will recognize the legendary name of El Cazador, and the discovery of her lost treasure that had arguably changed history. This may not be to PCGS or NGC standards, but I am peachy pirate pleased!

While this version of El Cazador Treasure is not like the high grade, certified, slabbed and put up on a Sotheby’s Numismatic Auctions version. It was authentic to me, easily identifiable upon observation, and I liked the feel of the physical coin rather than having it locked up in plastic.

It’s not only silver but a tangible piece of history. I can do without the fancy labels and grading, after all, I’m a Silver Stacking Pirate on a budget and not a bloody Financial Advisor. 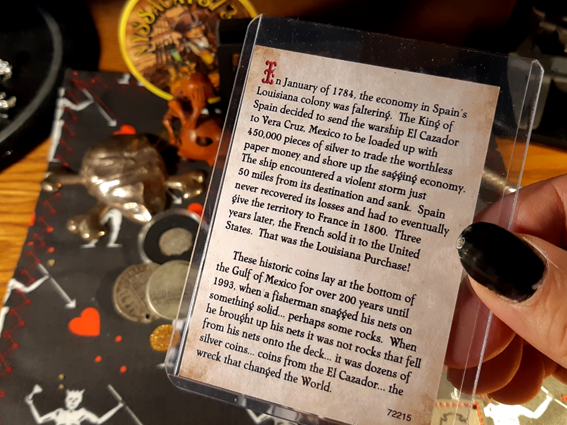 And while there are plenty of publicity and articles of this discovery of this lost Treasure since 1993, yet there was scant information surrounding the fate of ship and crew. Naturally, I find myself much more interested in the ship itself.

Our Treasure 2 Reales Coin: Close up Reverse; Hispanic Crowned Coat of Arms
Legend; ·HISPAN·ET IND·REX·oM·2R·F·M·
”King of Spain and the Indies, Mexico City 2 Reales FM”
weight 6.75g, Fineness 0.903
Diameter 28mm, Thickness 1.2mm
Centuries of wave action exposure have slowly ‘Sand blasted’ away the original luster and fine features away leaving a ghost of the remaining strike. Some aspects of the original strike remain, party or temporarily protected by other coins or debris leaving clues to this coin’s original identity. Cracks emerge at weak points of the coin as coin making is still relatively crude and may have not been evenly annealed prior to striking.
1774 Mexico Colonial 2 Reales Carlos III The El Cazador sailing ship’s name is translated as, “The Hunter”. It was not a large ship, a 90-foot Brigantine of war that could be armed up to 18 Guns and a crew complement of up to a hundred men. She is designed to be agile, fast, with a shallow draft, and enough armament to pursue and hunt down pirates and smugglers in the shallows or up a river. The vessel is a two masted ship, unlike the generic Image supplied on the card that came with the coin. The colony of Louisiana was ceded earlier by the French to the Spanish. Battered by natural setbacks and an economy languishing on improvised extended credit, hard currency was needed, and continued neglect will eventually lead to a poor outcome. So, to avoid the violent demonstrations and possible succession of the Colony, Carlos III made the order to send the equivalent of 450,000 in silver Pesos from Vera Cruz to New Orleans to exchange the paper script for silver in New Orleans. 37,500 pounds of coin.
The El Cazador set out on January 11th, 1784 and was never heard from again. So, what happened to the El Cazador?

Most historians simply theorized that the ship had succumbed to a storm. But Writer E. Anderson Bullock makes the claim that seems an outlandish on its surface, that this unfortunate Spanish Brig of War was sunk in a freak Mississippi Ice Floe on February 1784, 50 miles short of New Orleans. It is a compelling argument when you read the whole article here.

"Manifest Destiny arguments aside, the El Cazador may have actually achieved another notable place in history that stands on its own. To my knowledge, it is probably the only ship in recorded history to be sunk by ice in the Gulf of Mexico. That alone should put it in the book of records." ~ E.A. Bullock

19 Tons of silver was a significant amount of weight for a 90-ton ship not necessarily designed for transport of goods in addition to it’s compliment in armament. Commanding was an experienced officer Lt. Gabriel de Campos y Pineda is a loyal and competent officer to the crown. A size and strike comparison of an intact 1782 Mexican Colonial 1 Reale to the damaged shipwreck ½ Reale. And by the nose of Carlos III on the obverse and Hispanic Arms on the Reverse we can identify the coin despite the loss of most features.

As a side note, it has been inferred that the designer of the coin’s obverse deliberately but subtly exaggerated the King’s nose for an unknown reason. Poor Leadership? Economic incompetence? This was from a comment by another more learned collector I met at a coin show a few years ago. Sadly, that person had passed on before I could learn more.

Size Comparison of the coins 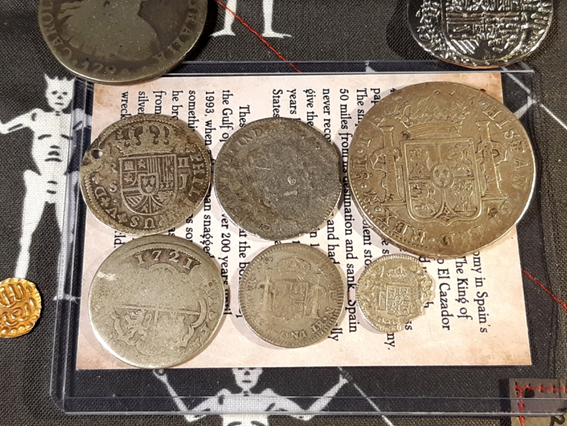 Bullock’s corroborating data of personal weather observations by the Colonists, reports of river ships destroyed and sunk by ice floes, severe changes in wind and temperature, reported blockages of river crossings, the effect of El Nino on the Gulf Stream, Arctic weather outflow all combine to stage a once-in-every 150 year event that sent a treasure laden ship to the bottom of the sea and leaving no survivors but only a mystery. In 1993 A fishing vessel named ‘The Mistake’ hauls up a treasure thought lost for good only to begin the unraveling of a mystery of how the El Cazador was lost and bring back to life the economic and political history of Louisiana’s colonial past.

Like ghosts of the past these storied coins should remind us of not just the vital role hard currency was needed to develop a colony but remind us also of the courageous crew of the El Cazador that tried their best in suddenly terrible circumstances that had befallen them.

Bullock also makes a point of political intrigue. There was more to the story of how the colony may be only a part of a much bigger plan.

"The loss of the El Cazador’s silver was at least a nail in that coffin, though it was obviously not the single defining reason for the eventual sale of Louisiana back to France. " ~ E.A. Bullock

Historical Shipwreck silver, another awesome gift from ☠ Captain Nyssacat373! 💋 And with more yet to come! And my humble apologies for a late post.

Thank you for coming aboard unto me pirate blog today!