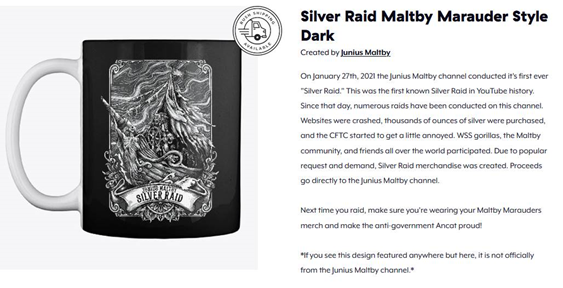  “Blackbirds tend to like shiny things.” ~ The Bloody Raven

I like to keep abreast of the happenings of my Silver Stacking YouTube community and if you don’t know by now a new rallying cry was heard, news spread, bells rang in the towers, dusty muskets lifted from their wall mounts, merchant vessels are docked and loaded with cannons and made ready for war.

At the end of the harbor dock stood a man who was not at the end of his rope but a man who has had enough of witnessing the decades in systematic robbing of his fellow countrymen’s wealth by the ungodly corrupt body politics. Governed by men who don’t care about the people they were supposed to serve and run rough shod over Constitutional Rule of Law.

The sun rises from over the horizon, it’s warm light bathing his tricorn hat before moving down his Frock coat. The glorious light then glistens off the hilt of his cutlass, flintlock pistol and silver belt buckle finally down to his leather boots. He watches the ships make final preparations, as this is no ordinary war. An assuring smile lifts the corners of his mouth and confident in his abilities and of his crews of volunteers, men and women of free will chose to serve under him to undertake this sacred responsibility.

Like Sun Tzu, he knew his enemy well, he knew their profound weakness, their Achille’s heel. In fact, a shot need not be fired, nor a malicious swing of the sword, nor clenched fist need strike upon the face of the enemy. But by the peaceful and legal acquisition of silver into the strong hands of the public and his countrymen shall cause those institutions of tyranny and corruption to crumble.
The wind shifts, the tide begins to turn, and the Silver Raid begins.

Years ago, Junius was one of the first YouTube channels I followed even before I started Stacking in preparation of the inevitable economic upheaval. My instincts bothered me about the constant diminishing buying power of my hard-earned wages, when I though paper currency was money. My eyes were opened as he intelligently unveils the layers revealing to my horror a terribly flawed financial system designed solely to steal the wealth of hard-working citizens. They were all in on it; Government, banks, and corporations. And behind them is an Elite club, a club the late Comedian George Carlin says, “And you’re not in it!” 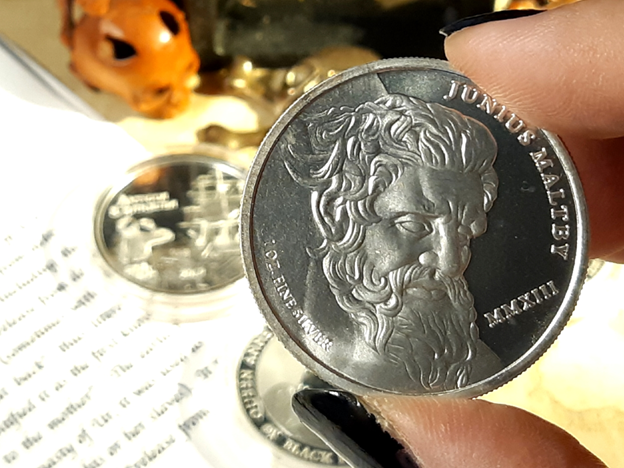  …sculpted by the artist Luigi Badia. In Greek mythology Marsyas was tied to a pole and flailed alive by the god Apollo after challenging the god to a musical contest. Marsyas was admired for his intelligence and self-control, not found by Greeks in ordinary ways. Among the Romans, Marsyas was cast as the inventor of augury, a proponent of free speech and 'Speaking the Truth to power.' ~ Junius Maltby's COA

While his channel often made observations and commentaries on the economic news of the day his metal emphasis was largely on gold as his stacking preference. Despite that preference he always welcomed silver stackers. By mid-2016, the ideal of a Challenge coin was put in motion to celebrate the 10,000 Subscribers celebration of the Junius Maltby Channel. November 2016 saw the production dies ready to go and orders are initiated. In March 2017, the first strikes are revealed, and public orders are opened. 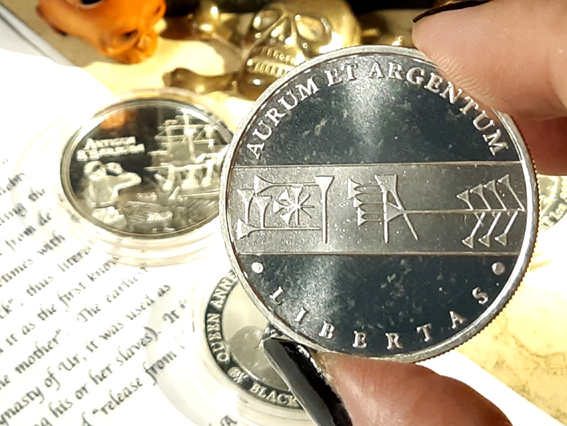  …the ancient cuneiform inscription for the Sumerian word “Amaji”… it has been translated as “freedom, as well as “manumission” (exemption from debts and obligations) and the restoration of person and property to their original status including the remission of debts. The word originates from the noun, ama “Mother” and with the present participle “returning to mother.” … Assyriologist Samuel Noah Kramer has identified it as the first known written reference to the concept of freedom. It’s literal meaning as “Return to the mother”. ~ Junius Maltby’s COA

I had the opportunity to acquire one as a long time subscriber revealing my delight in a video shared with the Stacking community. I even had the privilege of receiving an official Certificate of Authenticity signed by Junius himself. 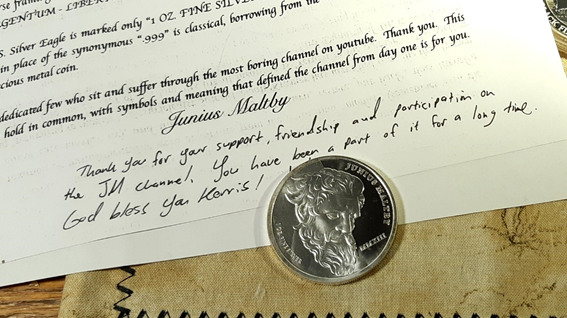 Fast forward to January 2021 where his typical Junius’ intelligent and self-controlled style like that of the Greco Roman figure Marsyas, has changed his candor. Though he often describes himself in the guise of a ranting and rambling madman but I can best describe his new approach like a brilliant, Sound Money, Firebrand preacher pirate, still the same hallmark Intelligence and self-control of Marsyas but on Steroids and mad as hell.

The revitalized Junius Maltby faced his critics then shrugging them off like water off a duck’s back. Turning the enemy’s sharp barbs into memes against his attackers. Daring authorities to summon him in front of a contrived hearing panels headed by a corrupt politician like Maxine Waters or some Federal Reserve lackey only to expose their corruption and their disregard of the Rule of law. 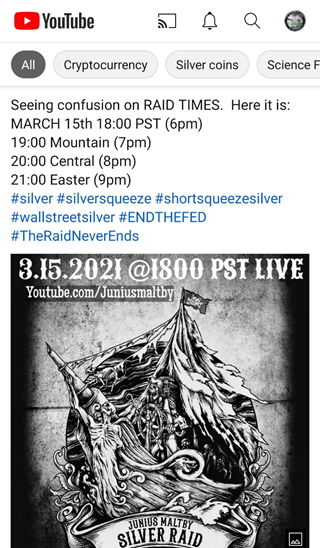 With the recent successfully entertaining ‘Raids’ like the YPS 10 oz, [Yeagermeister Bars](https://yeagerspouredsilver.com/product-category/yeagermeister/) and Golden State mint’s [Praedatum in Mundo](https://www.goldenstatemint.com/1-oz-Pieces-of-Eight-BU-Silver-Round-999-Fine.html) Pieces of Eight round.

The Powers-that-Be began to notice his activities and their proxies accused his channel of ‘Coercing subscribers to buy physical silver against their will.’


The notion of Junius ‘Coercing’ Subscribers is of course at best ridiculous. Then he was accused of ‘collaborating in the destabilization of the silver market’ another tiny straw man argument when compared to the 800 million oz per year world silver production. Yet turn a blind eye to the same collaboration by the Hedge Funds that it is apparently legal to profit from curb stomping GameStop shares.


This kind of flack can only mean that he’s over the intended target.
Undeterred, the Silver raids will continue. #TheRaidNeverEnds 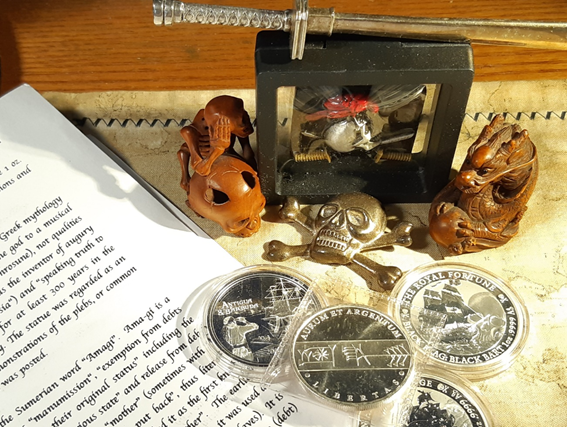 There’s been a lot of talk in about this physical silver squeeze in the YouTube community but this ‘organized buying club’ ideal is also resonating through the Reddit’s WallStreetSilver and SilverBackedApes. We’re united in agreement that to beat these corrupt authorities is to take physical silver off the Market. 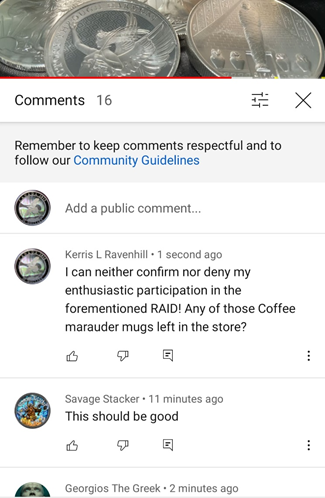 I find myself excited over the ideal and plan to be indisposed all this afternoon to consider doing my little part of this Silver Raid. The Bloody Raven would sure want to join into the fun.

Rest assured that there will be no coercion by peer pressure, no verbal threats, no threat of bodily harm on anyone, and participation is solely on a voluntary basis.


Each person is a free agent upon him or herself in deciding to participate in any manner they see fit.


Do consider joining in on the YouTube live stream as posted 6 PM PST in my region where Junius will reveal his latest Silver Raid target.