Hello, LBIer's and CLer's. Welcome to this weeks CUBLIFE (CL) token update. We are going to look at this week's CUB harvests, reinvestment and weekly dividend APY. This update post is released weekly, dividends are paid in LEO every Friday at 9 pm UTC and new CUBLIFE (CL) tokens are issued once per month every 21st.

What is CUBLIFE?
CUBLIFE (CL) in a nutshell is a hive-engine token dedicated to investing in CUBfinance that pays out weekly dividends in the form of LEO. All LEO/HIVE raised from monthly token issues is invested in CUBfinance. 50% of weekly harvests are converted to LEO and issued to CL token holders, 40% is reinvested back into the platform and 10% goes to LBI as an operators fee for maintaining and actively managing the wallet. 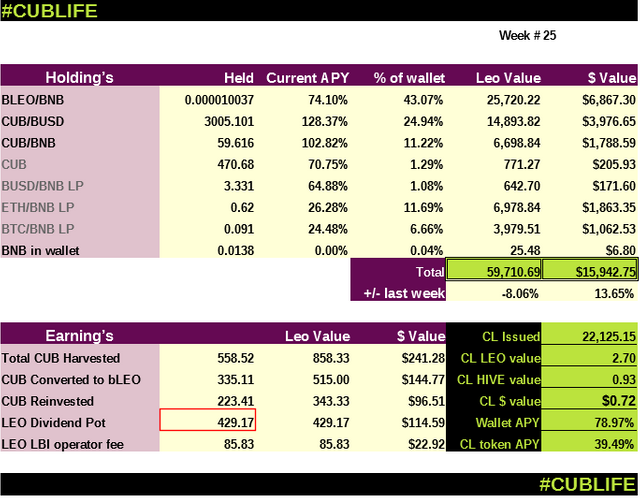 Solid week all round, our holding are 13.6% in terms of dollars from last week and in turn, we harvested more CUB, not much more but more is more and better than less. The price of LEO is up by 3-4 cents from last week so we got less LEO but it's worth more, out 1 hand and into the other.

This weeks dividend is 39.5% and it's going to get harder to maintain if the value of everything goes up. This weeks 40% was invested into the BTC/BNB Kingdom and it's just crossed over $1000 in value so let's aim to add another $500 to that before we move to the next one 😁 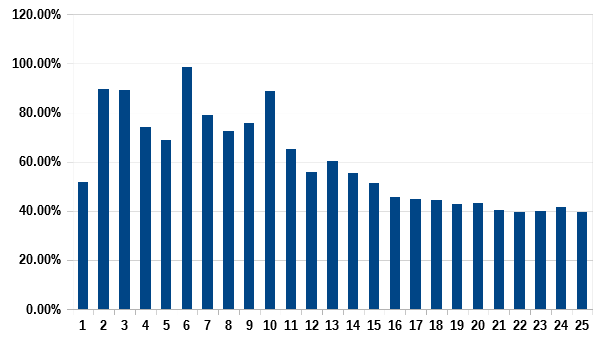 This month's CL token issue
Every 21st of each month, new CL tokens are issued to those that have sent either HIVE or LEO to the @cublife before the end of the 20th. The month goes 21st-20th. If you send in funds on the 21st, you'll be waiting till next month. Conversions take place once per month on the 21st with new CL tokens being minted to the same value as the existing ones in circulation. There are 12 CL token issues per year.

You can transfer LEO/HIVE or HIVEp from hive-engine. If you send both LEO and HIVE, you will receive 2 token issues, 1 for each. You can confirm your funds have been received in the table below which are posted weekly and updated 2-3 times per week.

No orders in yet as this months monthly mintage took place yesterday.

Another great week behind us, the APY remaining consistentish at 40%. We head into this second half of the bullrun with a decent sized wallet and the potential to harvest alot of rewards. We'll see what happens when the final pump busts the bubble in a few months and plan on from there. Im still hoping that the LEO price will recover, it's probably still way up on what it was 1 year ago but it was over $1 for a while there and everything else is popping off. bLEO is equal to 21.5% of the total CUBlife wallet so a hop, skip and jump to 50 cents would be pretty handy for our bottom line.