Welcome to the 3rd edition of Dcity Helper.

For some time now, i have been helping Dcity newcomers with free cards. I started doing this in collaboration with former Dcity president @ecoinstant and continued doing so when @thegoliath took over the presidency.

At the same time i have been helping @jrcornel with advice on how to build a Dcity Powercity and i have enjoyed watching him climb the ranks (currently 9th) ever since.

As i am (a little less since yesterday) comfortably ranking 1st, i decided that helping other players would be a good way to give back a little to the game and i have turned my ad-hoc giveaways and advice into this more structured form: Dcity Helper.

In this series I will be making regular posts, where i look at cities of newcomers and smaller players and give them a little nudge in the right direction, This means i will give them some free cards, which best benefits their cities, as well as some unsollicited advice on how to best, imho, build and develop their city.

In today's post i am taking a look at @sockpuppet. This player does not seem to be very active and although he is in the top 40, his city hardly makes any SIM. Dcity is all about balance and Sockpuppet's city is probably the most unbalanced city around.

This is a screenshot of his city in it's current state. 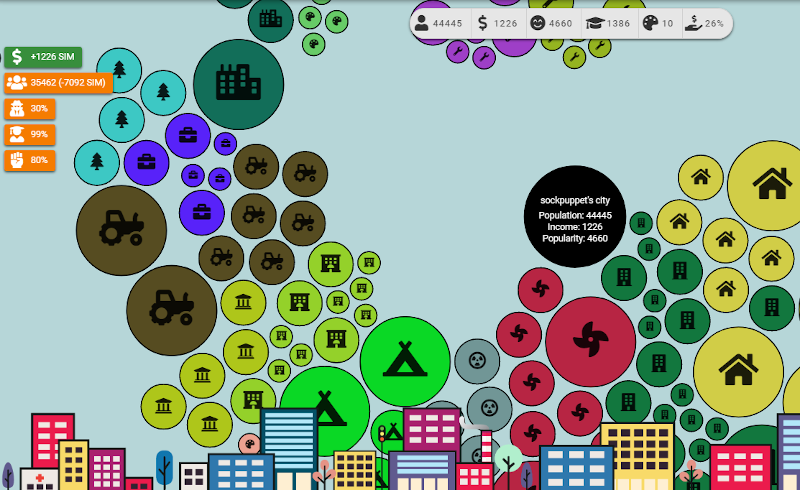 It is plain to see why his SIM income is so low. His unemployment is so high that the daily social costs of more than 7000 SIM almost completely eat away his income.

Dcity has the option to de-activate buildings, so let's see what happens when we clean up this city.

He has 90 garbage dumps. Without advanced recycling they produce no income, so let's deactivate all of them.

He has 320 parks. Parks produce no income, so again we are going to deactivate all of them.

Also, Sockpuppet has more education than he needs. Education is capped at 25%, so all eduction above 1000 is useless. We will de-activate 39 of his universities and bring the number back to just above 1000. 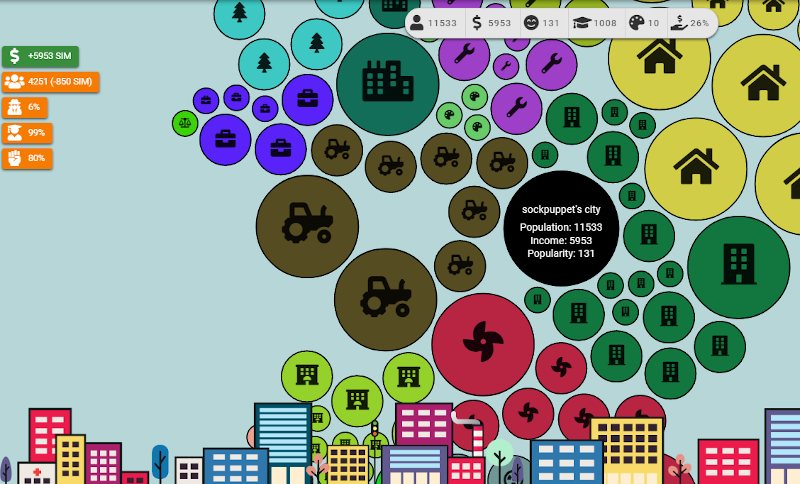 But he is missing out on even more. If we sell the now de-activated buildings on the market we get 810 hive from the garbage dumps. 352 hive from the parks and 156 from the universities, for a total of 1318 hive.

The total amount lost per year on sockpuppet's city is 10,974 hive or $1,646 US.
There are a lot of families in the world who have less than that to live off.

Normally i give cards to the city featured in these posts, but it seems they would be wasted here. So instead i will give away 25 hive worth of cards to the commenters on this post.

Comment “better give it to me” on this post and i will check your city to see which card suits your city best. First come, first served.

I'd like to give a big thank you to @onealfa , @jrcornel , @rollandthomas , @bdvoter and everybody else who voted on these Dcity Helper posts. Thanks to you i am able to give away many more cards to Dcity players.