A reply to @antisocialist..And my last 'real' post on Hive as @lucylin. ..Hive - A fucking clown world of greedy, scared, intellectual lightweights...

If you don't like Lucy bad mouthing dpos, then you should be flagging his videos, too.

Regards, every tyrant in history who faces criticism.

It's fascinating that @antisoclialist supports the enforcement of the haves using it's power to dictate to the have not's - especially when stating (on his account header)...
" when society enslaves you antisocialism is a duty..."
I find this very difficult juxtaposition - and one that's not easily reconcilable (in what must be my obviously very, very, slow mind). 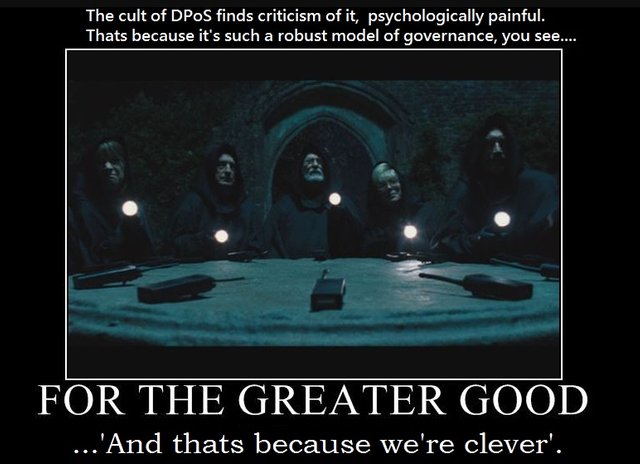 You do not support free speech, you support speech you agree with.

Nothing wrong with that.

The language of the authoritarian loving communist, to be sure - and not one that would ever challenge the establishments status quo.
I won't go into that any further, but there are lots of interesting psychological insights into that very specific mindset of 'no moral compass' , online....

*I'm not having a go at @antisocialist here, btw.

Very few users vote on content that makes them upset.

...but the psychological weaklings (lovers of authority), just love to down vote on things that does upset their ever so fragile world view...bless.

....and what they don't even realize is, that by doing what they're doing with their petulant, childish , fear based tantrums - they're showing to the world in bright neon technicolor - the very point of the criticism !!!

They are shouting out as loud as possible - proudly almost - about their own weak intellect and their own desire and greed/need to control.
All for the entire world to observe...Bizarre.
Why on earth would you do that? 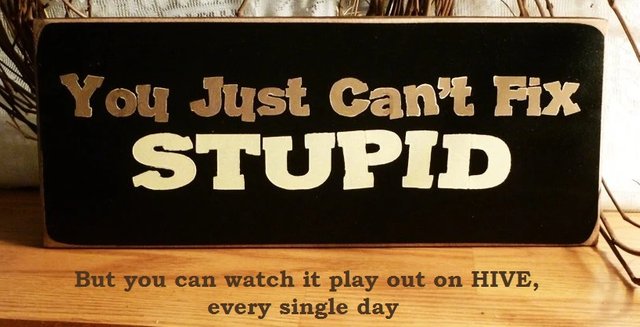 Talk about dim...
A 20 watt light bulb has more going on than some people's brain activity, in these parts...

You couldn't make this up....This is a fucking low IQ clown world! 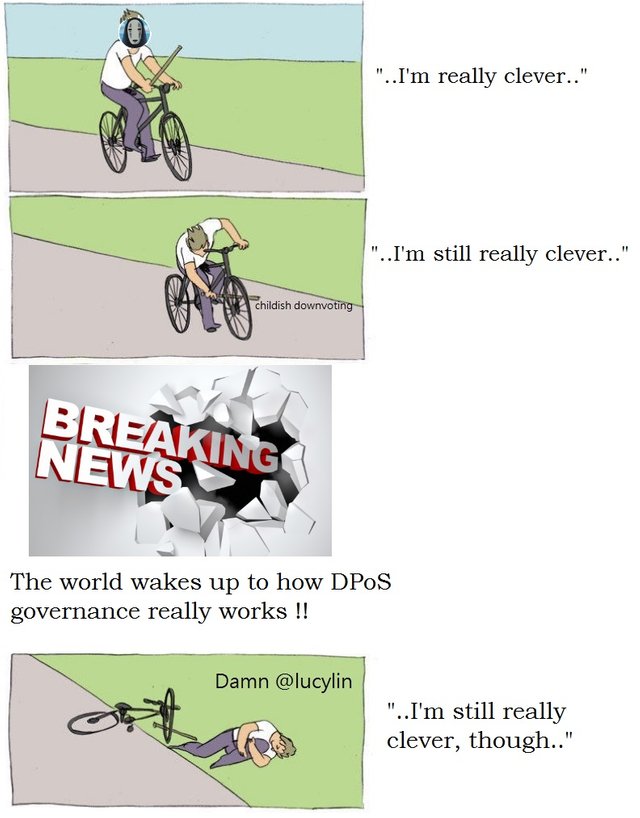 I was gonna do a post today on the recent @theycallmedan video.
Not from any techy perspective (which I find as dull as dishwater and of very little interest), but from a philosophical, and intellectual perspective.

Now I'm not.
I just can't be arsed.
(and it would fall on mostly uncomprehending ears, so why fucking bother ?).

I'll give you a pointer though - let's see if you can work it out for yourselves....

Starting at 1 hour and 1 minute for about 10 minutes.

The context is different (Biden, tax, and corporations) - the principles remain the same. (large account holders, power, and and oligarchy)....oh,and why 'the smart people' will leave a shitty environment.
Psssst....'brain drains' act as a significant societal marker for upcoming collapses, btw...just thought I'd mention that.
No pennies dropping yet ?
No aroma of coffee ?
...No?... Thought not.

Working on principles and not context (the terrain changes), they talk about why DPoS is a bad idea - (I'm not sure they realize what it is that they're actually saying).
Copy of video downloaded - just in case...

As an aside..it's funny how Dan and his sidekick (sorry matey, no disrespect - I don't know your name).. keep mentioning bringing people to web 3.0 ... but I'm now taking people from web 3.0 , to my blog - on a web 2.0 platform - it's a much better product....and now more profitable.
(thanks to the DPoS governance, lack of any integrity or spine, from other large stakeholders, and down voting by mororns.)

It's funny how it forever extholled as wanting to see the token distirvuted, but maintain an insular distribution in their own small clique of large accounts and brain dead sycophants.(see the upvoting patterns - they speak volumes).

It's funny how they go on about the 'user case' of hive - and express a desire to 'see and help out in the the third world', while me - in the third world - is pushed off the platform through financial terrorism - while the privileged first world, large stakeholders, are highly rewarded for total and utter bullshit content.

As Dan said,
'You never look at words, you take a step back, and you look at the results'.
Actions, not words.

This post, and my exit from hive - are the results of financial terrorism to a hive account holder, living in the third world .

If I didn't have other sources of income available to me, (that I've had to open up again - which was due entirely to the last 8 months of financial terrorism, as I ditched everything to see if I could hack a living from hive..)

So...All due entirely to other people's negative actions on my account on Hive ( and/or the apathy from the large stakeholder- who are spineless - or sympathetic - to these actions).

I'M 'SHOWING THE RESULTS' OF DOWN VOTING.

THAT IS THE DIRECT RESULT OF DPoS and MALICIOUS downvoting on a platform without ANY integrity, with people who have no courage to do the right thing.

To all the accounts that have had the power to alter this tyranny, and instead, stayed silent (you spineless cucks)...I hope you never sleep well again - Well, at least not until you clean your heads and locate where your spine should be.

FACTOID:
My Brain was in the top 0.1% of 'intelligence' range - if using IQ as the metric.

A couple of decades of 'brain cauterization' later via partying and narcotics - it has - by my own subjective examination , (and using chess as the barometer) reduced down to around the 135 -145 mark.
So still not a dummy (as stupid as a bag of geologists in some regards).
Asperger's does that, apparently. A bit sketchy, to say the least, while uber focused on other things, all at the same time...

Top tip for the future tyrants...(for those who are, you know, 'really clever') ...Never fuck off an asparagus who has a martyr complex when concerning moral harms and not doing the right thing...just sayin'.
We're tenacious little fuckers...

You know, by logical dissection...
*Pssst...These are the same people giving direction to the hive platform.
No.... seriously... they are...

I don’t care what Lucy does or doesn’t.

...People who don't care, do not use their time, energy, or execute actions, or invest in any way at all, into something that they care nothing about.
If you didn't care, but expended that energy - that would make you as stoopid as bag of geologists..

OR.... they're as dumb as a bag of geologist who don't actually do much thinking at all.

For example:
Dowvotes and comments on my posts in the last 8 months by the poison dwarf on my account ? - IN THE HUNDREDS.
(and that's not including the time spent on discord with some other lowIQ poison dwarfs, in relation to nuking my account...bless..).

@lucylin's downvotes on the poison dwarfs account, in the same period of time = 0

That's because I TRULY don't care.

Examining the comments that the poison dwarf made to @antisocialist, you can clearly see a lack of pretty much any thought processes going on in that vacuum of a cranium.
Zero self awareness (an indication of stupidity).
And if you can't see what I'm pointing out - it's crystal clear - then educate yourself some more - you really do need to.

The lack of intelligence and basic cognitive ability (or lying) is displayed to the world - by the commenter themselves. (is that 'because they're clever?'... lol)

This shows the intelligence levels (or lack of) of the accounts that are directing hive's future...lmao.

Let me finish this dissection of 'the cranial vacuum', before I sign off forever..

Makes no difference to me.

But...but...but...It DOES make difference to him - He reacts to every little thing I do.
Like an obedient little doggy.

As long as I have any stake I will make sure that they don’t get rewarded :)
Why? Because they are spammers.

Now, even though the poison dwarf and his commie comrades are , like really clever... 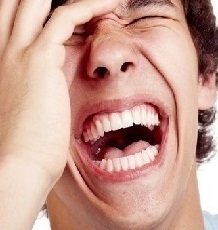 I though I'd better consult a real thicky when it comes to computer related definitions .
....Yeah, I know , malwarebytes might know very little in comparison to the really clever poison dwarf, but I had a look see anyway, just to see what they said...

But it's spam right?

Conclusions to that comment then ?...I'll let you draw your own...
It'll give the rest of the world good giggle, to!

Do you like being lied to?
Being gas lighted?
Being treated like an idiot by brain dead morons whose only god is love of control and greed?
(psychologically, it's mostly because they feel so powerless in themselves - cucks most probably in a relationship - and ultra poor, spiritually - so they try to use money to fill the void - have you noticed how 'the boring dwarf extraordinaire' talks about money - incessantly ?
That's the feeling 'spiritually empty' person, expressing itself for all to see..bless...). 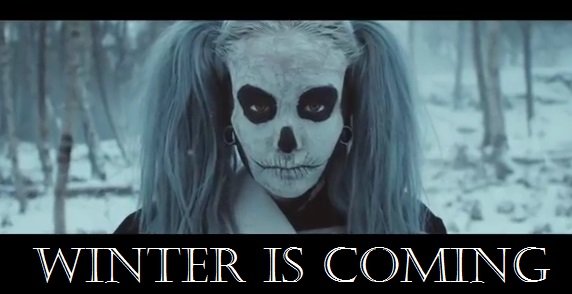 (and if you think I'm going anywhere, you're even dimmer than I thought - I'll be writing about guerrilla warfare strategies concerning ANY DPoS system - and how to exploit the system, while following 'code is law'...I'm now starting to care..).

I did offer my services in this regard, a long time ago - but they obviously weren't' of any interest - of no tangible value - so know I'll be giving away my knowledge for free, instead.
To everyone, not just the witnesses and coders.

I was gonna tag all the witnesses and large stakeholders here, but again, I just can't be arsed anymore.
You will all be tagged a lot though, from now on.

Hive is not a sentient being (and quite arguably, neither are too many of the witnesses either)....BUT DON'T WORRY !!!!
.... I'll be doing my very best to encourage - or force- some cognitive behaviors out of y'all...I promise. 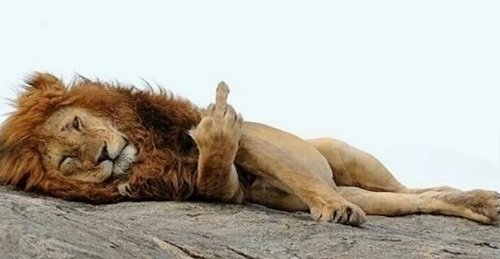