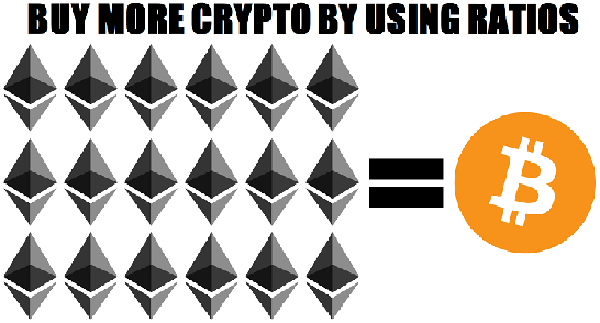 For precious metals, there is something called the Gold Silver Ratio. That's just the number of ounces of silver needed to equal one ounce of gold. Investopedia.com is more specific when it says that it "measures the number of ounces of silver required to purchase one ounce of gold." If this ratio exists for precious metals, is there a similar ratio for cryptocurrencies? Of course! It's just math. Being able to track this calculated value will let you buy more crypto by using ratios.

By itself it's just a number, a calculatd ratio used in isolation. What makes the Gold Silver Ratio powerful is how it tracks over time:

Historically, the Gold Silver ratio had been in the neighborhood of 10-20.

When fiat money was decoupled from gold fifty years ago, the Gold Silver Ratio grew bigger and bigger to the point where it floats between 65 and 85.

(If ever there was a time to take advantage of the Gold Silver Ratio, it was March 2020. Unfortunately, supplies of both metals were more limited than usual, and many dealers were themselves shut down.)

Many financial resources used for education and reference will say that the Gold Silver Ratio has a long history. Investopedia said "[T]he gold-silver ratio is the oldest continuously tracked exchange rate in history."

When using the Gold Silver Ratio, it's OK if both precious metals fall in value.

It's OK if both precious metals go up in value. It's also OK if one metal goes up as the other goes down.

What matters is the path taken by the Gold Silver Ratio from one time to another.

Since both rise or fall at different rates. As with all other commodities, supply and demand determine the prices for each metal. They change at different rates, and it's that rate differential will cause the change in the Gold Silver Ratio.

The Gold Silver Ratio is used for the two precious metals and how one is valued against the other. However, it's just one of many ratios used to accomplish something similar.

It takes an insane amount of shitcoins to buy 1 BTC. Theoretically this can be done, but why?

More likely is determining how much of a major crypto is needed to buy 1 BTC.

Just to show how ratios can be applied to cryptos, here is a table from Coindesk.com showing spot prices in USD for Bitcoin, Ethereum, Ripple, and Cardano:

Now we see a table of ratios for those four cryptos:

The second table is just a snapshot in time. The ratios in that table are just numbers.

The value of ratios can be seen when another snapshhot in time is taken later. The changes in rates between those snapshots in time will determine whether the altcoins get swapped for Bitcoin or if Bitcoin is sold to buy more altcoins.

The same application of ratios can be done with the Hive tokens we care about. Below is a table showing 4 of them:

Ratios are used to determine how much of one thing can be used to buy another. The oldest continuously used ratio is the Gold to Silver Ratio.

When we engage in foreign exchange during a trip to another country, we're actually using ratios of our local currency to our destination's currency.

Using ratios allow us to not worry whether the price of one item rises or falls because we're more concerned with the value of one item against another.

Just as ratios are used with precious metals (or even gold against oil), ratios can be used with cryptocurrencies. Most ratios would feature some altcoin valued against Bitcoin. We can even use ratios to determine how many Hive tokens can be used to buy LEO.

When the ratio increases, that's a good time to sell one crypto in order to bulk up on another. When the ratio drops, fewer units of the lesser crypto can be used to by the more valuable crypto.