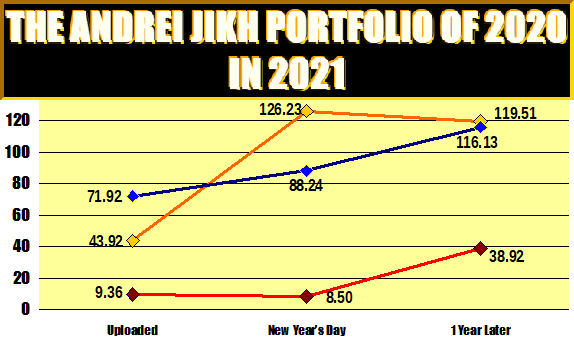 At one point, Andrei Jikh was known as the magic card trick instructor for the starring cast of the movie Now You See Me 2. Around that time, Andrei Jikh had also made numerous appearances on television programs such as The Steve Harvey Show and online publications such as iTunes & NBC.

These days, Andrei Jikh is known for the YouTube channel he runs on Big Tech's leading video platform. As of 19 July 2021, the video channel bearing his name has approximately 1.64 million subscibers. The Andrei Jikh channel can be found in the personal finance space on YouTube. Most videos tend to be about teaching personal finance, investing, and financial minimalism.

Among the areas Andrei Jikh covers in his YouTube channel is cryptocurrencies.

In this video he discusses the 9 cryptocurrencies he holds. To fill out the Top 10 list he included Dogecoin, but he was just kidding when he mentioned it and clarified that he does not own any DOGE:

#10 - DOGECOIN, the goodest of coins. Just kidding, I do NOT own Dogecoin.

Just for Top 10 purposes (since Andrei Jikh made it 10 out of 9), this is how DOGE performed on three milestone dates:

The Cryptocurrencies in Andrei Jikh's Portfolio

As expected, the Big 2 Cryptocurrencies are in Andrei Jikh's portfolio: Bitcoin (BTC) and Ethereum (ETH). These are the cryptocurrency equivalent of Blue Chip stocks on the Dow Jones Industrials for stocks.

As Andrei Jikh notes on the YouTube page for the video "How To Become Rich (My Top 10 Crypto)", the 3 Bitcoin spinoffs are in his portfolio because he has Bitcoin (BTC):

This means Andrei Jikh had been holding Bitcoin for at least 3 years when he uploaded his video. These 3 hard forks of Bitcoin took place during those 3 years, and he was airdopped equivalent BTC value for each of these cryptocurrencies.

The Other Bitcoin Spinoffs

The coolest thing about Dash is its funding model. Dash keeps 10% of its mining profits to upgrading its own network in a democratic voting process, which means it can literally fund it’s own operation and be self sufficient, without being bought by corporate interest. That to me is a very interesting feature that’s worth speculating on.

It's worth speculating on Dash (DASH), and it's worth HODLing. Andrei Jikh has done both with Dash (DASH).

Not including Dogecoin (as explained earlier), below is the 2nd table listing the cryptocurrencies in Andre Jikh's portfolio.

Due to the various scales of cryptocurrency prices, the values shown in the table will be shown in 4 separate charts to make basic trend analysis easier.

Of the 9 cryptocurrencies Andrei Jikh's portfolio, 8 of them increased in USD price between the Upload date and the 1 Year Later date. Of those 8, 7 of them were trending up by New Year's Day 2021. 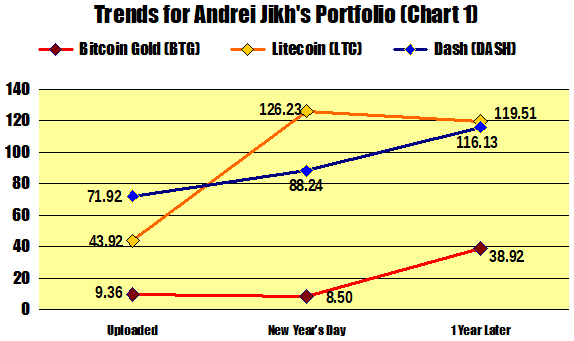 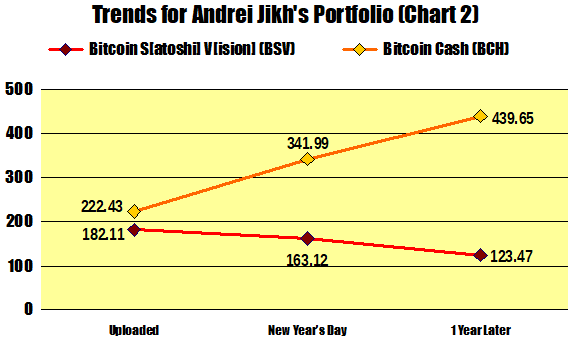 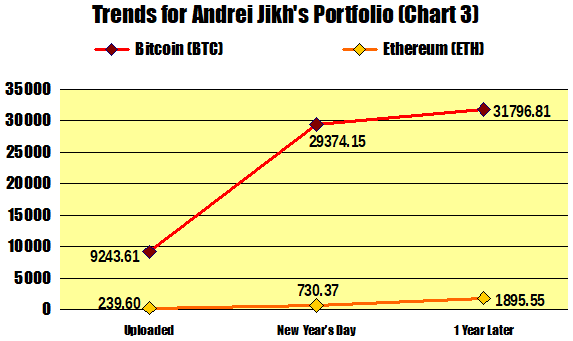 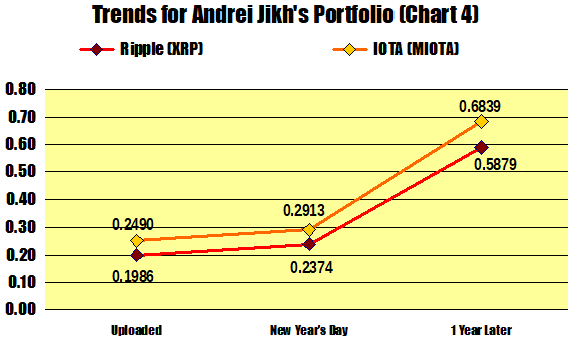 Both Ripple (XRP) and IOTA (MIOTA) are priced below USD 1, puting them in the range of the more popular fiat currencies traded in the ForEx markets. The charts for both XRP and MIOTA are nearly identical.

HODLing cryptocurrencies during the course of any given 365-day period-- as demonstrated by using the 13 July 2020 though 13 July 2021 as the example-- is more than likely to produce at the very least modest gains.

Due to the timing of the video Andrei Jikh uploaded on 13 July 2020, he may not have anticipated the astounding moonshot made by Dogecoin as it went reached it's ATH of USD 0.7376 on 7 May 2021 after being less than USD 0.01 on New Year's Day and USD 0.003178 at the close on Upload date. Perhaps in a video to be made later in 2021 we can discover if he revised his opinions on Dogecoin.

One important conclusion is that found money usually helps. The Bitcoin spinoffs Andrei Jikh was airdropped made big gains for him. Since these coins were airdropped, it was literally found money-- he didn't do a thing to acquire them except own BTC. And the "found money" brought him more earnings to add to his net worth.

Another important conclusion is that big gains can be made no matter the price in local fiat currency of the cryptocurrency one holds. The cryptocurrency in Andrei Jikh's porfolio in 2020-- if we review it in 2021-- made big gains across all price ranges (Bitcoin-range, thousands, hundreds, tens, singles, even fractional values).

The one loser Andrei Jikh had-- Bitcoin S[atoshi] V[ision] (BSV)-- came from "found money," so the loss in price wasn't as great as it would have been had he spent hard-earned monet on BSV. A loss is a loss, and losses aren't fun for anyone; however, in the case of Andrei Jikh, this particular loss didn't hurt as much.

Overall, Andrei Jikh had a good 365-day period with his cryptocurrency holdings. Andrei Jikh also proved the value of HODLing.