That's the sentiment I'm getting from quite a few cartoon characters on Twitter, some of them being rather influential. 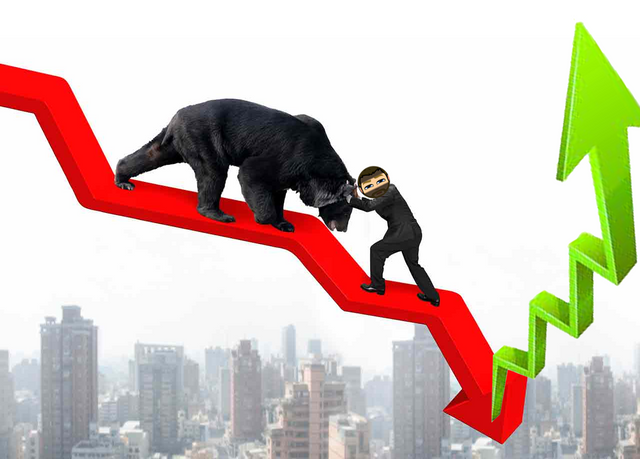 Whoever is peddling this narrative that we've entered another multi-year bear market is either outright retarded (pardon my French), delusional, or simply a paid actor. They keep spreading this deliberately misleading information in order to make NOOBz sell their coineros to Giga strong hands, very cheaply before the moon mission is continued. This entire recent FUD/crash event was orchestrated by black hat smart money players who wanted to get more entries but obviously not at such a heavily marked-up (pre-dump) price.

After all, that's the price only plebs have to pay after smart money runs it up and that's exactly what they did.

They've gobbled up the supply like flies feasting on a fresh piece of horse shit.

For three months straight your Karens of the world, uber drivers and baristas we're aping into crypto while bitcorn ranged in between 50k and 65k unknowingly falling straight into a trap.

Thinking it's going straight to 100k because of their laser eyes, they kept buying up the supply.

On the other side of the trade, malicious actors were playing them from the get-go and they were preparing for their next move.

While I won't speculate on who these people are, I will point out the obvious. Stuff that you can see from the charts and stuff that you could have read/seen online. It does paint an obvious picture of how this scheme is carried out and who profits from it.

This is how it's done boiz.

Run up the price

Most people miss the chance to get in early as they are unsure if this time it's different and that this rally won't fail like the others but lo and behold this time truly is different but retail investors have missed the boat. 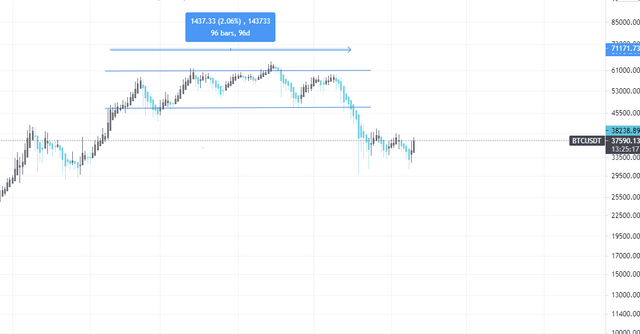 This is the real pleb trap and this is where most people lose money, unironically even in a bull market.

After a period of massive expansion, which most plebs have missed out on, it's time to entrap as many participants as possible.

Paint a painstakingly boring, three-month sideways correction while blasting us with Mega bullish articles, tweets, videos and announcements. A ton of news and media outlets and smol/big time influencers were paid off to keep pushing out the bullish gospel of both bitcoin and crypto in general.

Microstrategy is buying, Tesla is buying, thousands of small to medium-sized companies are throwing their reserves at crapto so retail bites the bait.

You could smell the testosterone in the air from all the bullishness.

After months of sideways price action and as they like to call it "bullish selling", when the last uber driver has bought a few satoshis and started day trading on Binance and your grandma is asking you about Metamask, it's time to move on next phase.

Now that the maximum amount of people have finally tapped out and decided to buy 60k btc and 4k eth, manipulators are ready to unleash hell.

First, they load up the FUD machine.

Influencers, media outlets, government agencies and even countries official representatives are paid off to push FUD about bitcoin and crypto.

Simultaneously, as retail is drowning in FUD news the price starts plummeting as smart money overflows the exchanges with billions of dollars in sell orders, all while opening massive short positions beforehand ofc. 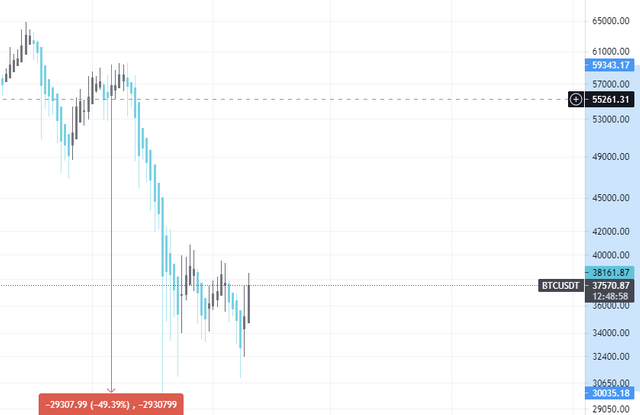 Bitcoin and eth both down 50%, shitcoins down 70-90% it's a shitshow. You haven't tethered enough and your leveraged positions are wiped out. You are liquidated and once again have less money than you've started with.

Just another day of getting scammed by the future of finance, amirite?

Now plebs think the world is ending and that they will never financially recover from such losses and they won't. Not because of such enormous unrealized losses but because of the fact that they are actually dumb enough to succumb to the fud and realize the loss by selling at a loss.

These coins you are selling at a loss go right back into the pockets of the manipulators as their buy orders are filled at a much lower price than they sold for, all while profiting off of those huge short positions they opened before the crash.

Do you really want to keep making the filthy rich richer or do you want to fucking make it in this market?

By some tweets I've been reading it seems that a lot of you won't make it which is devastating as we're in the eye of the storm of the biggest bull market crypto has ever seen.

This is where we're at right now but what happens next?

Run it back turbo

This is when they get to buy back more coins for less money they sold them for.

When they are done filling their bags with cheap coins they will continue pushing the price back up again, printing new ATH's across the board and going full circle once again, banking billions of dollars and re-starting this entire process all over again.

This is nothing new.

This same old tactic is played over and over again because it works and people are stupid enough to keep falling for it time and time again.

If you've ever wondered how this scheme is designed to make you feel/act and why it's so brutally effective in enriching the perpetrators there isn't a more perfect explanation than this legendary video.

Go watch it now, it's both educational and extremely hilarious.

Morale of the story:

The bull market is in full swing fellas, don't let this small bump in the road throw off balance.

No, I don't think bitcoin is ever going to 3k ever again, the scale of the overlayed graph is out of whack but you get the point, it's a fucking bear trap!

Don't let them fool you into becoming a bear during a bull market.

Don't let them steal your shekles!

Take care dudes and dudettes and as shillster Ivan On Tech says: "May the pump be with you!"