The Floor Above The Bear

What's your plan for the bear market?

"Back in the day" there was really only two options available: Hold or Sell.

If people wanted to secure their bull market gains as prices tumbled into the bear, they had to sell into something that would protect them, which was fiat or more recently, stables. This "natural" process meant that the markets were flooded with sellers, reducing scarcity and adding a lot of downward pressure on prices. The more they fell, the more people would sell, until a price was reached where people on one side said, "I ain't selling for that!" and on the other, "This is my buy point!" 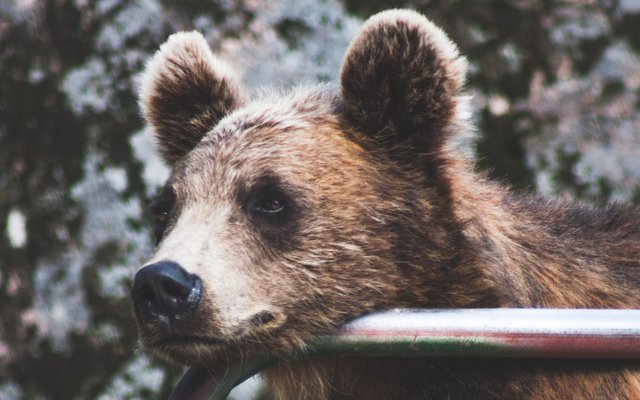 Holders lamented not selling sooner, sellers were glad they sold. No-coiners celebrated the downfall with glee.

But that simplicity has disappeared, because the crypto industry has been advancing and introducing new products and services that mean there are no longer just the straight buy and sell options, there are also various ways to invest for a return, whether it be staking as on Hive, as a Liquidity Provider for Yield, NFTs for token speculation, NFTs for gaming to rent or play, collateralization for interest earnings... the list goes on.

But, while everyone has a plan of some kind as to how they are going to approach this, most people still think in terms of buy and sell, especially the newbies into the market (there are many and will be many more in the next months) who are still unfamiliar with the industry and available options. They are likely to sell in the hope to buy back at the lows.

But, what are "the lows" going to be now that there are other options as to how to secure capital tokens, including holding for a relatively steady income yield? This is pretty much impossible to say, but at least a large percentage of people are not going to sell their tokens at all and instead gamble on the next bull market and hold their tokens. In the meantime, they might do something like, sell some percentage at the peaks for stables to stake for a yield return, stake the larger tokens in single-side pools for a return, invest into some usable NFTs like Axie, Gods Unchained or Splinterlands for a return, stake on Hive for curation and interest return.

I think that with a lot of these new options (old on Hive) there is the potential that there will be far more holders for yield than expected, meaning that as the price drops, market scarcity will set in earlier, so the return of the bulls might not be as far away as it was last time.

The other aspect of this is the yield itself. One of the problems I had in the depth of the last bear was that due to life circumstances and the fact that I was one of the "silly holders", I had almost nothing to buy with. However, this time around I plan on having enough from the highs and, enough in yield earning potential that when the lows return, I will be able to move something in. Due to the nature of crypto, that "something" needn't even be that much in order to be a significant investment come the following bull market return.

As we know, if a person would have consistently been putting 5 or 10 dollars a day (relative to location) into crypto the last 3 years, that amount would be more than decent now. For those who are able to lock up some of their tokens for yield, getting coffee money to invest into the bear prices shouldn't be too much of a hassle to obtain, and because it is still in crypto, swapping for other cryptos is far easier mentally than converting from fiat.

Again, I think this will mean that the lows will not be as low, as many people will see it as "free money" and start buying back with less risk than if they are directly injecting cash from their IRL wallet. They will likely buy back a bit earlier with less concern about hitting the bottom of the market price and as a result, that bottom will be higher, which will mean that for those looking for the "expected lows" based on past performance, it might never arrive and once it starts moving, they will be forced to get in higher than they had planned or, become no-coiners. This also means that the people who were buying, will be able to take profits earlier if they choose and if they are in tokens that will see volume, their small amounts will be rapidly supported, moving their "high buy" into a solid position faster. The market volatility will decrease.

Of course, this is just my speculation and mapping, as it helps me form a visual representation of my market beliefs that I can then track, adjust and act upon as I need. I think gone are the days where it is as simple as "I will sell at this price" as now there are many options to consider and pros and cons to each. I don't think the yield farming is going to be as lucrative as it is now, but even if the baseline is 10% and enough is held, that can be a significant buy-in over the space of a year, expanding token holdings and hopefully, setting a new personal wealth foundation to build upon for the future.

My goal is to have several income streams that are able to provide trickles I can use in the midst of the bear to invest deeper and then, five years down the track, things change again. I don't think I am the only one thinking along this vein, which means many people are looking to build personal "income support" channels that will allow them to hold their own, with what they own, in order to own.

As said, much of crypto is about the encouragement of resource and asset ownership and that means at some point, selling out to fiat gets taken out as an option for most, as it is essentially opting into the legacy system where we are predominantly renters. A lot of future wealth is going to be generated through passive means on products and services that are actively used and in the digital space, the range of available options is rapidly expanding. None of us are forced into taking part, but I think at some point, opting in becomes such a no-brainer decision, very few will remain no-coiners. I will keep holding and owning to enjoy that future.

So, what are your plans?