Banks Are Not Optimistic About The Economy

What is going on at the Federal Reserve? It seems they are very bi-polar these days. Or are they?

Recently the Central Bank has entered the Repo market and engaged in the selling of securities. They are doing this with the intention of trying to pull liquidity out of the market. This is a problem since the banks are sitting on a lot of cash.

All the checks that were sent out over the last year have filled the banking system. Each time someone gets a check, they deposit in the bank (or it is direct deposit). Either way, it is now part of the banking system, a move that allows the banks to put it to work.

There is one problem: the banks do not need the money. In fact, they are sitting on so much, they are looking for places to put it. The reason being that banks cannot just sit on cash. To pay interest to depositors, they need to generate some type of income.

For banks that means either lending or buying interest bearing securities.

The Repo market is an ideal setting for banks to put some of their excess reserves. They can enter the overnight market and earn a bit of interest off their assets. This is why the interest on a saving account is so awful. The banks are not getting a great rate of return but it is something.

Here we come to the bigger question: why would the banks not engage in the more profitable practice of lending? After all, that pays a much better return. You would think when the banking system has plenty of money, it would go on a lending spree.

IF we look at what took place the last year, we see what the banks were doing.

This doesn't make a lot of sense in light of the rhetoric we keep hearing about the economy reopening and the growth that we are going to see. If that is truly the case, why is business lending contracting?

To me, this says that the banking industry is not real optimistic about the business environment. This has put the Fed on notice. They are scared of a market collapse which then can shift to a downfall (further?) in the economy. Do not forget, the Fed operates on the principle of the Wealth Effect, the idea that a rising market will make people feel richer, hence enabling them to engage in spending patterns they would normally resist.

If this is the case, the reverse is also true. The Fed fears that a falling market will cause people concern, leading them to tighten their spending.

So we have a situation where the banks have their excess reserves going to the Repo market. The excess reserve is any amount over the base reserve requirements the bank has to abide by. With so much money in the system, the banks are swimming in cash. The Fed is trying to sop it up as quickly as they can to aid the banks in their dilemma. Yet we have a situation where business lending, in spite of all the money in the banking system, is contracting.

What could be the cause of this? Perhaps consumer sentiment is leading some banks thinking. 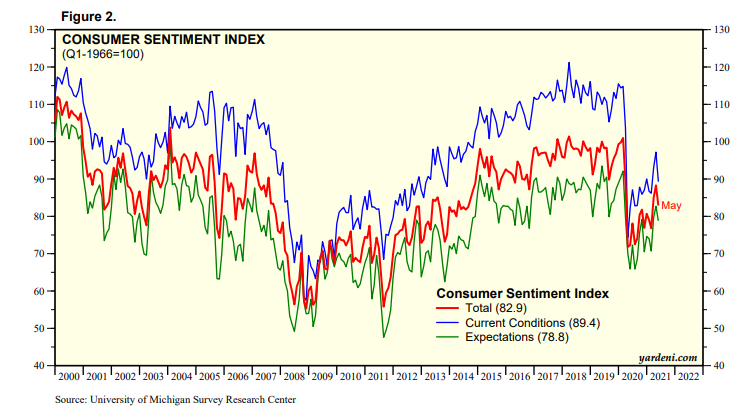 As we can see, the sentiment index fell of a cliff last year which is no great surprise. Since its bottom, it improved somewhat. The problem is that it is far below where it was before the pandemic hit. We also see a fairly decent drop in May.

Not exactly an indicator that the future will be better.

Another things we can see from the chart is the trend was a bit downward before the shutdown last year. This might also be figuring into the banks uncertainty with business lending.

Finally, it might be simply a situation whereby banks are well aware there are a number of industries still in trouble. Small businesses were crushed likely leading a decline in lending in that sector of the economy. While there are improvements in some areas, another slowdown would cause defaults to rise.

It will be interesting to see how the second half of the year unfolds. It is evident, at this point, that the banks are taking a cautious view when it comes to businesses. The lending in that area is contracting which tells me they are not overly confident in the business prospects going forward.

Banks being afraid to lend is not a positive referendum on the prospects of the economy.

This is something to watch.