The End Of The Car Dealership

This is a subject that I was meaning to write about for a while. It is something that I think few are looking at yet it is in line with ongoing technological trends. We are seeing a lot of things taking place along these lines so it makes total sense to me.

For as long as most any of us can remember, the car dealership was a part of every town, especially small ones. Even today, in the non-urban areas, it is not uncommon to see car dealerships as the largest employer.

Of course, the days of the family owned car dealership died many moons ago. These days, in the United States, we see mega-dealerships that are multi-billion entities. They are basically "selling factories" that churn out an incredible amount of vehicles.

This all is going to come to an end. I do not thing most realize it but we are going reliving what took place 10 years ago.

The Lesson From Amazon

A decade ago, few, if any, knew about the retail apocalypse. We were proceeding along thinking that everything was status quo. There were stores which were in business for many decades that we frequented. Some of them were shopped at by many generations of families.

Little did we know that, within a few short years, a lot of them would encounter financial difficulty. Some of the most heralded retail addresses would see closures. Retail institutions like Sears and Macy's saw their worlds turned upside down.

The predator was something they did not expect. Amazon was quietly eating up market share as more sales went online. It got to the point where the retail establishments ended up becoming showrooms for Amazon. People would look at the product in a competitors store then go home and buy it online

What we need to emphasize here is the fact that this took place very quietly. That is, of course, until it was too late. Then the noise hit like a sonic boom. Many establishments found themselves sinking fast.

At this moment, the retail sector is in tatters. The physical chains are trying to fight back yet, in some ways. Amazon is trending on their turf. This powerful giant is intent on taking out most of the competition.

I do not know if this is a word but let us call it getting Teslorized. Here is where we see an enormous amount of disruption. While most focus upon the impact upon Toyota, Ford, and General Motors, I want to concentrate on the car dealers.

This is the network through which most of the cars in the United States are sold. It is safe to presume it is like that in most countries but we will use U.S. numbers for simplicity sake.

Here is the vehicles sales for the United States: 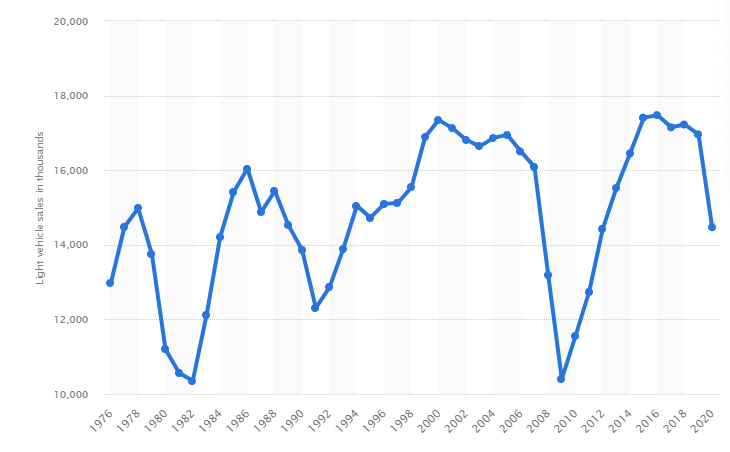 As we can see, the industry is typically between 15M-17M cars sold. We will use the 15 million number as the basis for our calculations.

So how much impact will Tesla have?

Here is the end of 3rd quarter vehicle sales for the US. 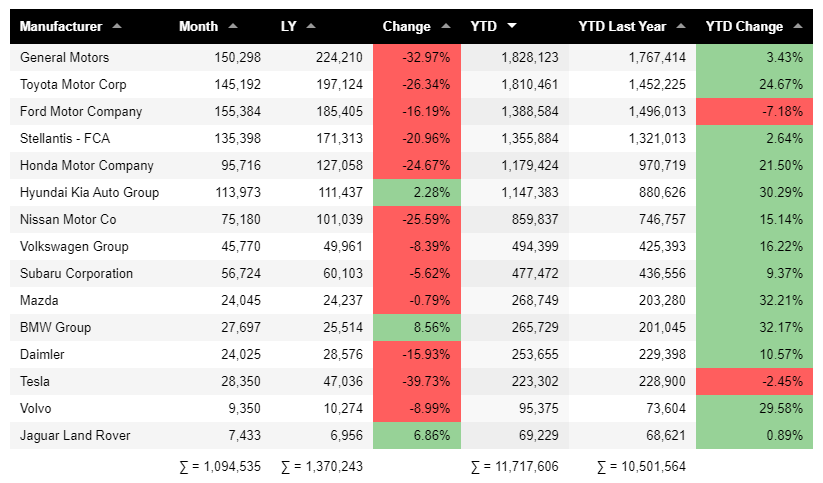 The numbers tell us that, at this point, Tesla is merely a rounding error. Their US volume does not amount to much of the pie at all. We can see that 223K out of 11.7 million does not equate to much.

Obviously, the numbers out of China are much better. It is a larger factory, one that they are using to export to Europe and Australia. The US plant, is older, smaller, and less efficient.

Nevertheless, Amazon was not considered much of a threat a decade ago in the retail world. Thus, it is best not to overlook Tesla in this equation.

The End Of The Car Dealership

While car dealership are well established, they are not popular. People hate going to buy a car. Survey after survey tell us how much people despise the process.

With Tesla, this is removed. It has no car dealerships. Instead, all vehicles are ordered online (sound familiar). Thus, if the company can establish a large part of the market, the local dealership could be in a heap of trouble.

In fact, that is exactly what I believe is going to happen.

Tesla reaffirmed on their latest earnings call that they expect to increase their production by a minimum of 50% each year for the foreseeable future. This year, they will likely come in around 900K vehicles sold. Most are overseas so we can give them roughly 250K in the US for 2021.

There is, however, an ace in the hole. The company is within a few weeks of opening a massive factory in Austin, Tx. This is going to produce the Model Y and then, towards the end of 2022, start on the Cybertruck.

Here is where things get very interesting. Using 2023 as our year, what happens to car dealerships if Tesla is selling 1.5 million vehicles in the US? While this seems like a huge jump, many presume the ramp up time for the Model Y will mirror Shanghai. This means that they will be able to blow out at least 750K of these vehicles in 2023. Add in the Cybertruck which could spit out 400K along with expansion of Fremont and you are at the 1.5 million level.

That is roughly 1/10th of the US vehicle market. What happens when 10% of all vehicles sold are done outside the dealership network?

The reality is that any industry has a tough time losing 10% of its revenue. It does, however, get much worse.

If the company can keep scaling, either through efficiency or adding more lines, we could see this number cross 2 million in 2024. Seems outrageous at the moment yet that is the pace of scaling this company is on. For the past 5 years, the vehicle growth rate came in at a yearly 56%.

What we need to ask is whether the dealership network can sustain a 15% hit in the next half decade? We are not even taking into account the loss in service revenue which, we can presume, will take a while to filter through. Loss of new sales is an immediate hit though.

How many cars does Tesla need to sell before these dealerships find themselves in a similar position to the retail sector.

I believe they are in the process of being Teslorized. This is something that few are talking about.